An Appetite for Violets by Martine Bailey 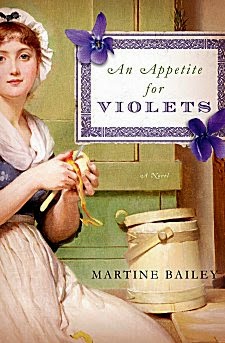 First Line: As Kitt tramped on alone towards the villa, unease clung to him like the rancid sweat that soaked his shirt.

It's 1772, and Biddy Leigh's dream is to leave her job as under-cook at Mawton Hall, marry her childhood sweetheart, and run her own tavern. Just as all her plans are about to fall in place, Lady Carinna, her master's new young wife, bribes Biddy into accompanying her to Italy. The young woman is intrigued, not only by her travel companions, but by all the new food she eats along the way, and she records her adventures and culinary discoveries in an old recipe book, The Cook's Jewel.

In London Biddy meets Lady Carinna's younger brother. In France she deduces Lady Carinna's secret, and in Italy she becomes entangled in a dangerous conspiracy. Biddy has to tread very carefully, for the secrets she's learned could either lead her to a brand-new life or to her downfall.

The opening scene of An Appetite for Violets is a powerful one that stays with readers throughout the book and makes us want to find out what on earth happened. And then we're introduced to Biddy Leigh, a young woman who has a true talent for cooking and dreams that she's willing to work to make true. Her spirit is infectious, and in no time at all I was convinced that no matter what tried to knock Biddy down, she would refuse to be defeated. That is just the sort of character that makes you want to turn the pages.

Other characters are interesting as well-- the footman Loveday, Lady Carinna and her brother Kitt-- but Biddy is so vivid that everyone else pales in comparison. The pace of the story slows a bit from time to time, but I never lost interest. As Biddy tells us all that she observes, we deduce some things ahead of her-- but not all. Like Biddy, we're never privy to everything that goes on.

The thread of cooking runs throughout the book. Each chapter is headed by a recipe or a cure from The Cook's Jewel, which is truly a gem. (Volumes like these do exist.) The book is handwritten and has been handed down from cook to cook for generations, some of the concoctions dating back to the early 1500s. As Biddy adds her own entries from her travels-- she insists on going to one of the very first restaurants in Paris and also talks to the cooks when they stop at inns-- these chapter headings become a charming and integral part of the book.

If you're in the mood for a little "culinary gothic" with secrets and passions and a bit of the fashions of the day, I recommend An Appetite for Violets. I'll be remembering Biddy for a good long time.