Geared for the Grave by Duffy Brown 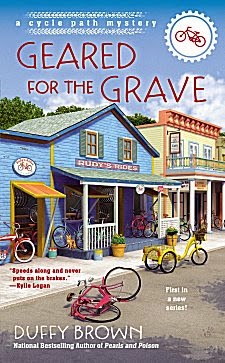 First Line: While cowering in the back of a ferryboat, head over railing and losing my lunch in Lake Huron, it occurred to me that no matter how old I am, I want to impress my parents.

Desperately in want of a promotion, Evie Bloomfield travels from Chicago to Mackinac Island in Michigan to help out at Rudy's Rides, a bicycle shop that just so happens to be owned by her boss's father, who's broken his leg. Unfortunately Evie has pedaled straight into more than renting two-wheeled transportation. Wealthy local (and pain in everyone's neck) Bunny Harrington dies in what was thought to be a freak bike accident, but when it's discovered that her brakes were tampered with, Suspect #1 is Rudy. To stay on her boss's good side, Evie's going to have to take off her training wheels and solve a murder.

To be honest, the major reason why I wanted to read Geared for the Grave was its setting, Mackinac Island, and author Duffy Brown paints a fine picture of just how magical this place can be. She also serves up some delightful humor with the euphemisms locals use to keep tourists in the dark about what's going on.

Evie is a delight as well, with her lack of grace, her passion for painting, and her knack for finding all the poison ivy patches on the island. She was in such a rush to make Brownie points with her boss that she didn't even read up on Mackinac Island, so its steep streets and lack of motorized transportation throws her for a loop-- and that loop catches many of the locals, too, who find Evie to be a bit of a handful.

I enjoyed the entire cast of characters even though Irish Donna's "brogue" didn't sound right. (I almost wanted to ask Donna if she were in the Witness Protection Program and using an assumed identity.) And in the midst of all the humor and getting acquainted with Evie and the islanders, I found a good mystery. Towards the very end I realized that I didn't have a clue whodunnit, and I just managed to figure it all out before Evie did. It certainly was a close race.

The only problem with finishing the book is the fact that I've got to wait for the next episode. Hurry up, Duffy-- I want to go back to Mackinac Island!