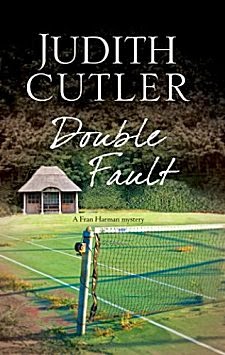 First Line: If this was retirement, why had he ever hesitated?

The police are facing more budget cuts, and if the force in Kent were any more short-staffed, they'd have trouble sending an officer out to issue a traffic ticket. All this couldn't come at a worse time for Chief Superintendent Fran Harman. Her wedding preparations are entering the final stages, and the multiple skeletons found in her garden have yielded a clue that a serial killer may be on the loose. Fran's case load  takes on yet another investigation when the young daughter of the tennis coach disappears from fiance Mark's club. It won't do a bit of good to look to the chief constable for support; all she can do is put her shoulder to the wheel and put in as many hours as it takes to get the job done, hope for the best, and remember to bring her crutches along.

When I think of the best crime fiction series that combine British police procedurals with the domestic lives of a wonderful cast of characters, Judith Cutler's Fran Harman series is one of the first two that come to mind. (The other is Deborah Crombie's Kincaid and James series.) If you're the type of reader who likes all the plot threads to be knotted and tied off by book's end, you may want to give Fran Harman a pass. Since her life is every bit as important as the cases she solves, some of those plot threads can take two or three books to resolve themselves. But if you're like me and love to bury yourselves in marvelous, nuanced characters and their lives-- as well as solve intriguing mysteries-- you're going to love this series. (It would be a good idea to read them in order, too.)

Fran's fiance Mark has retired from the police force, and one of the ways he's found to decompress and get some exercise is by joining the local tennis club. His expertise is badly needed when the little girl goes missing. For Fran, this case is of primary importance, and she purposely sets the case of the possible serial killer on the back burner while all stops are pulled to find the little girl before it's too late. One of the most interesting points made in Double Fault is how Mark's presence is both blessing and curse because, since he's retired,  some of the officers on the force consider him some sort of traitor. (Oh, that wonderful office politics!) There's a sense of urgency and foreboding in the little girl's disappearance that really increases the suspense and makes the pages turn faster and faster.

Of course Fran gives all her considerable talents to both cases, which have become mired in those budget cuts, staffing problems, and wranglings for promotion. Cutler does an excellent job of showing how the odds are increasingly stacked against officers who want to keep people safe. Many crime fiction authors who write police procedurals seem to stick with obnoxious superiors and leave the difficulties at that, but Cutler digs much deeper to show readers what all the problems are-- without once bogging down the plot.

From Fran, who can bring you out of your chair with one brusk command, make you laugh with one of her observations, freeze you with an icy glare, or wrap you in a hug; to Mark, who's dealing with family issues and the problems of the newly retired; to the women like Caffy Tyler who renovated their cottage and became honorary family; and on to suspenseful and absorbing investigations, I was completely wrapped up in this book. I can't wait to get my hands on the next one.