A Meditation on Murder by Robert Thorogood 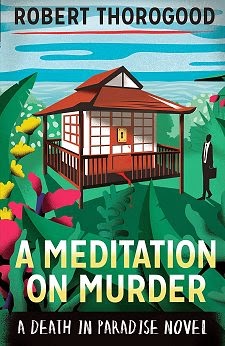 First Line: Aslan Kennedy had no need of an alarm clock.

On one of the most unspoiled islands in the Caribbean is The Retreat, a spiritual oasis catering to wealthy vacationers, run by Aslan Kennedy and his wife Rianka. Aslan has an idyllic life... until he's murdered in the locked Meditation Space with five guests who didn't see or hear a thing. It should be the perfect investigation for Detective Inspector Richard Poole since one of the people inside the crime scene has already confessed to the murder. The problem is, Poole doesn't believe her. In fact, he thinks she's the one person who couldn't have done it. No doubt about it. The only thing for Poole and his team to do is start turning over those stones. There's a killer underneath one of them.

Having enjoyed watching the BBC's "Death in Paradise," I looked forward to reading its creator's first mystery novel using the same setting and characters. This book is every bit as much fun as the television series.

Although I do wish that A Meditation on Murder hadn't been such a one-man show and that I could have seen more from the members of the detective inspector's team, let's face it-- Richard Poole is a marvelous character. Sent to this small Caribbean island from England to fill in for another inspector, Poole is still there, stuck somewhere that he loathes. He hates sand. He hates the overabundance of sunshine. He hates the heat. He hates Harry the lizard who refuses to leave Poole's house on the beach. And he doesn't do himself any favors by insisting on wearing his dark wool suits everyday. The man was born to be a curmudgeon, and he seems to enjoy every second of it. He was also born to be a detective inspector-- the man is a terrier when it comes to following leads and searching out clues. His team-- Camille, Dwayne and Fidel-- have hopes of converting Poole to their island lifestyle, but I personally believe they're doomed to failure.

As much as I enjoyed this book, I feel that the pacing needed a bit of fine-tuning. Whenever the story slowed down, my brain had time to ruminate, and as a result, whodunnit became crystal clear to me rather early on. That's a small complaint however, because I love the humor in this book, and I love each and every character-- all the way down to Harry the lizard. I'm looking forward to the next book in this series!