The End of the Wasp Season by Denise Mina 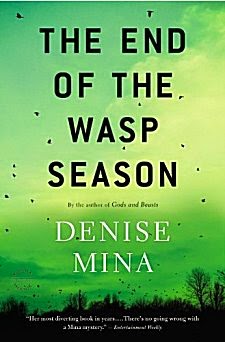 First Line: The silence startled Sarah from a hundred-fathom sleep.

The brutal murder of Sarah Erroll in a wealthy suburb of Glasgow seems to be a vicious, random attack. When Detective Inspector Alex Morrow is called in to investigate, she finds she just may have a bit too much on her plate. Heavily pregnant with twins, she's soon to go on maternity leave, but she's got a team that's more interested in revolting against their superior officer than they are in solving a murder. Morrow has no liking for her superior officer either, but she's tired of the politics, tired of dealing with the drama, and tired of murder. But regardless of how she feels, Alex Morrow will do the job because the victim deserves justice.

I have long been a Denise Mina fan. I devoured-- and was spellbound-- by her Garnethill and Paddy Meehan trilogies, and enjoyed the first Alex Morrow mystery, Still Midnight, when it was first released. When I began reading The End of the Wasp Season, I almost felt as though I needed a re-read of that first book because Alex Morrow wasn't quite as I remembered her. Far from putting me off, I just dug in and lost myself in the story.

I wouldn't be surprised if quite a few readers didn't care for this book. Likable characters are scarce on the ground, and we know the identity of the young woman's killer very early on. This didn't bother me however because there's no such thing as a two-dimensional character in a book written by Denise Mina. As she's already proven, she's a master at shining the spotlight on the disenfranchised, the outsiders, the broken souls that walk among us, and-- if not making them likable-- she makes them understandable and even, to a degree, sympathetic. To me, understanding a person is oftentimes more important than liking them, and I think Mina might agree. Occasionally shifting the point of view from Morrow to a troubled young boy named Thomas, the author helps us to comprehend the worlds both characters inhabit.

A lot of Alex Morrow's troubles in this book stem from in-house feuding. The superior officer is hated-- to the point that very few want to do anything at all that could possibly put the man in a good light. Morrow doesn't want to get mired in that bog, but as the investigation progresses at a slow crawl, she realizes that she's been cutting everyone too much slack because she's subconsciously marking time until her maternity leave. She's got to try her best to get everyone actively involved in the case, and she begins at the morning meeting in the incident room:

"Right," she said, and they settled. "Sarah Erroll was rich, pretty, young and leaves no family. Who cares? I do, but I think I'm the only one here." It was an unconventional start, surprising enough to make them sit up and listen. "My job is extra hard today because I have to try and manipulate you into giving a toss." She looked at them. "That's annoying."


I enjoyed this look at a dedicated homicide detective and at the havoc one selfish person can inflict on those around him. I enjoyed it a lot. But with its rushed ending and an overall sense of malaise, I can't rank The End of the Wasp Season in the top tier of Denise Mina's books. But even "second tier" is finer than many other writers' books. I have two more Alex Morrow books to read, and I'm definitely looking forward to them.