One Coffee With by Margaret Maron 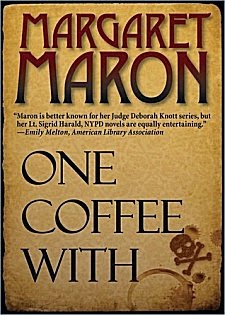 First Line: Few institutions of higher learning are content that their faculties do nothing but teach.

We originally meet Lieutenant Sigrid Harald of the New York Police Department as she tries to solve the murder of the deputy chairman of Vanderlyn College's Art Department. Who poisoned his morning coffee? As Harald soon learns, everyone in the department has both motive and opportunity, but she's going to have to work fast before someone else gets a little jolt in his java.

Margaret Maron is an author that I keep meaning to read-- especially after having read and enjoyed her first Judge Deborah Knott mystery-- and I keep getting sidetracked. First published in 1982, One Coffee With takes Maron back to her beginnings as a writer, and her introduction to this newest release should not be missed.

However the novel itself shows her inexperience at the time. The book is so focused on the minute ins and outs of the Art Department that the story takes much too long to get moving. By the time it does, I was almost at the point of wanting everyone to be found guilty and thrown in jail just so it would end.

Only when Maron begins to delve into Sigrid Harald's character does the book begin to come to life. She's closed off and quirky and prefers to be left alone, but she has an eye for detail that's phenomenal. I intend to continue with the series simply because I want to know more about Harald.

One Coffee With may have a problem here and there, but it's also plain to see the promise buried inside the story. It's the beginning of a phenomenal career, and I'm glad to see how it all began.