Streets of Fire by Troy Soos 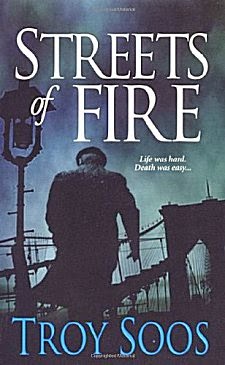 First Line: Marshall Webb wasn't even aware of how far he'd rolled his oak swivel chair back away from his desk.

Webb is dissatisfied with his job as a reporter for Harper's Weekly, mainly because he's required to sit at his desk and rewrite old articles instead of being out on the streets gathering new material. His old job as a dime Western novelist is looking more and more attractive.

After striking a bargain with his editor, Webb finds himself back out on the news beat in one of the worse winters of recent memory, and the icy streets are filled with tension. Brooklyn is torn apart over the news that it is losing its independence and joining with New York City, and a strike by the trolley workers threatens to paralyze the area.

Police are called in to keep the peace along the trolley lines, and one of the them is shot in the back and killed. Webb finds himself joining forces with an old friend, Brooklyn detective Buck Morehouse, and the whirlpool of corruption they begin uncovering will even affect Webb's friend Rebecca Davies and fellow social reformer Vivian O'Connell.

I read and loved the first three books in this series, and when I discovered that there was a fourth, I just had to get my hands on it. Soos is extremely adept at creating historical mysteries, although he's better known for his baseball mysteries (which my husband enjoyed). Webb and Davies make a strong pair of sleuths. Webb is an investigative journalist whose contact in the Brooklyn police, Buck Morehouse, has helped him on more than one case. Webb knows how to root around and get the facts. Buck has his own ways of meting out justice. In our modern eyes, Buck is a bit of a crooked cop, but in 1895 he's one of the most honest ones you'll find in the New York City area. If anything, readers get the impression that Buck has been beaten down by all the on-the-job corruption he has to face.

Into the mix of Webb and Morehouse add Rebecca Davies, a young woman of wealth and privilege who is in charge of the family's shelter for young homeless women. Rebecca's background means that she has entry into the finest homes in New York City. Her experience working with the underprivileged means that she's an idealist with street smarts. Put Webb and Davies together, and there are sparks. Add Morehouse, and there are murderers being brought to justice.

In Streets of Fire, Soos once again paints an indelible, three-dimensional portrait of the mean streets of New York during a time when graft and corruption were King. It's taken for granted that the rich and powerful will abuse their positions-- and the employees who work for them-- with alacrity. In setting this book during the trolley workers strike, Soos shows us people who are sick of the status quo and are willing to fight for better lives for themselves and their children. We get a further look at the plight of the poor as Rebecca shows Vivian how to choose the right building in the right area for a women's shelter as well as how to run it properly.

If only the mystery in this book lived up to its setting and its characters! As one chapter followed another, I couldn't help comparing Streets of Fire to its predecessors. Here the mystery is weak and extremely slow to start. The identity of the killer was not hard to deduce. I could even say that the investigation felt half-hearted-- almost as if the author had been told that his contract for the series wasn't going to be renewed before he even began writing. (This is pure speculation, by the way.) I love the first three books in this series, and I recommend them highly, and while this one is good, it just doesn't stand shoulder to shoulder with the others.