Murder in a Mill Town by P.B. Ryan 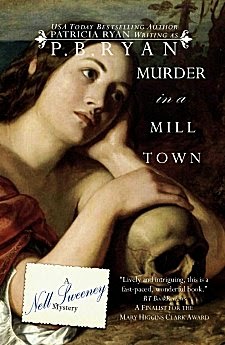 First Line: "We quarreled last March," said Nell Sweeney in a manfully deep, working class English accent-- or her best attempt at one-- embellished with just the slightest quaver of lunacy.

A poor and desperate couple come to Viola Hewitt to ask for help. Their daughter Bridget, employed by the Hewitt Mills and Dye Works, hasn't been seen for days. Mrs. Fallon in particular simply cannot believe that her daughter would take off without a word and feels that Bridget's ex-con lover may have had something to do with her disappearance.

As she has done in the past, wheelchair-bound Mrs. Hewitt calls on Nell Sweeney, a woman hired to be her companion and the governess to her granddaughter. Nell may look and behave like a lady now, but she's no stranger to the less law-abiding elements of Boston. With the help of the black sheep of the Hewitt clan, William, Nell begins to look for Bridget-- and finds herself in danger.

I really enjoyed the first book in this series, Still Life with Murder, but this second-- while good-- just isn't as dynamic as its predecessor. The mystery itself is tissue paper thin, and even with some misdirection added, the killer is rather obvious. As I kept reading, it became clear to me that Murder in a Mill Town isn't really about the mystery, it's about the growing relationship between Nell and Will and about Nell's past. A few of her secrets were revealed in Still Life with Murder, but there are plenty more to share in this one.

Will continues to be a fascinating character and is every bit as flawed as Nell-- but in a completely different way. Both are brave and smart and possess a dry wit. They certainly showcase Ryan's skill in rich, nuanced characterization. These two definitely will not have a smooth trip to any sort of relationship, and not just because they come from such different backgrounds. Two people in particular are going to cause them problems every step of the way, and it will be very interesting to see what develops in future books. I only hope that those future books have stronger mysteries to solve.