Jane and the Twelve Days of Christmas by Stephanie Barron 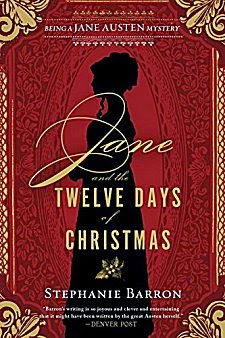 First Line: "Jane," said my mother over the lolling head of the parson slumbering beside her, "be so good as to shift your bandbox and secure my reticule."

Having traveled in horrible weather and on abominable roads to Steventon in order to spend the Christmas holidays with her brother and his family, Jane Austen finds that everyone has been invited to The Vyne to celebrate. Since scarcely anyone was looking forward to being shut in the house with James' self-centered, complaining wife, the invitation is accepted with pleasure, and everyone bundles up for the trip to the old manor house.

The festivities are expected to be even more joyous this year since Napoleon has been exiled to Elba, and Jane's novel Mansfield Park is selling well. Unfortunately the high spirits are not long lived. One of the guests dies in an accident which Jane and another person quickly view as suspicious. The problem is, if the accident was murder, then the killer must be one of Jane's fellow snowbound guests, and Jane needs help in solving the crime before tragedy strikes again.

Author Stephanie Barron's setting places the reader firmly in Jane Austen's day. The language is evocative of the writer, including some of the common spellings of the day-- like "chuse" instead of "choose." This is used sparingly and in no way is it confusing. In reading this twelfth book in the series, readers will understand why people thought traveling seven miles was sometimes too much to ask, and the Christmas festivities are brought to life. Another thing that's made clear is how difficult it could be to perform any sort of investigation.

But perhaps the historical additions that touched me the most were the ones involving Jane's relationship with her family-- in particular her sister Cassandra who feared that Jane's increasing popularity as an author might mean future marriage and parting from her beloved sister. Another poignant addition was how the news concerning Bonaparte had consequences for the Austen brothers who were in the military. Barron makes the reader feel Jane's anxiety.

Unfortunately the mystery in this book doesn't quite live up to its setting. With a limited cast available, deducing a killer's identity isn't difficult, but that's not what bothered me the most because there is much more to a mystery than whodunnit. No, the one thing that bothered me was the book's pace, which felt glacially slow. In fact, those twelve days of Christmas felt about seven days too long.

If you're an Austen fan, you should enjoy this book-- as long as you're not expecting a fast-paced narrative.