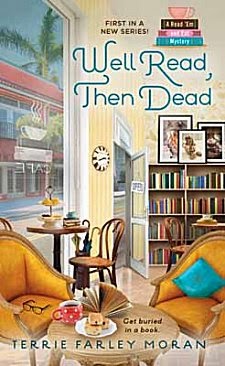 It may have taken them awhile to get the right mix, but Sassy Cabot and Bridgy Mayfield have a winner with their business, the Read 'Em and Eat Café and Bookstore. They get good trade from tourists coming to Fort Meyers and the barrier islands of Florida. They have their regulars, and they have several book clubs that meet there.

Disbelief ensues when Delia Batson is found dead in her home, and horror quickly follows when it's discovered that the painfully shy elderly lady was murdered. No matter how busy things are, Delia's cousin, Miss Augusta Maddox, insists that Sassy must find out who killed Delia-- and Sassy just can't say no.

Terrie Farley Moran has whipped up a fine beginning to this cozy series. No "dump cakes" for this author; she's chosen each of her ingredients with care and skillfully blended them together before putting the pan in the oven. The setting with its siren song of sandy beaches, sunshine, and old pirate treasure easily lures the unwary deeper into the story, which can lead them on a merry chase through quite a cast of suspects.

The major ingredient in any story is its characters, and Moran's characters run the gamut from tart to sweet. Sassy and Bridgy make good partners, and with the addition of an aunt who's seemingly been swept off the front steps of Tara, a chef who's magic in the kitchen, and various regular customers and friends, this series should be set up for a good, long run. Moran's even added a bit of hearts and flowers to her story, and it looks to be the sort of romance to move slowly so readers can savor each bite. Perhaps my favorite (bittersweet) part of this book is the fact that Moran lets her elderly characters have some real depth. Neither Miss Augusta nor Miss Delia are simple little old maiden ladies, and that is so good to see.

It's going to be fun to discover what's going on next at the Read 'Em and Eat.