The Axe Factor by Colin Cotterill 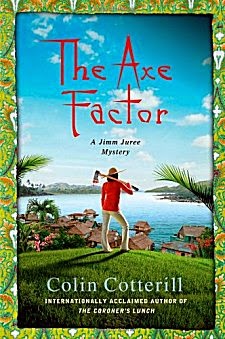 Jimm Juree still misses the bright lights of Chiang Mai. Forced to move with her family to the dilapidated Gulf Bay Lovely Resort and Restaurant in rural Thailand, she has become the sole support of her family. She cooks and cleans and has taken on two part-time jobs to make sure there are at least a couple of coins to clang together at the bottom of the family coffer.

The online journal for the Chumphon Gazette (one of those part-time jobs) sends Jimm to interview a local British mystery writer, Conrad Coralbank. She's also been asked by a friend to look into the disappearance of the local doctor who never returned from a conference. It doesn't take long for Jimm to learn that the doctor isn't the only woman who's gone missing-- no one's seen Conrad Coralbank's young, pretty Thai wife either. Jimm's grandfather is suspicious, Conrad has a gleam in his eye every time he looks at Jimm, and there's a major storm moving in. There just might be a hot time at the Gulf Bay Lovely Resort and Restaurant....

Colin Cotterill is one of the sneakiest writers I know. Author of the superb Dr. Siri Paiboun mysteries and now the Jimm Juree mysteries set in rural Thailand, Cotterill is a master at writing books so filled with wit and whimsey that you may not realize that you're actually learning something as you read. With the Jimm Juree books, you learn how a Westernized Thai city girl gets used to life out in the country. You learn about the political atmosphere in Thailand. You learn how poor people survive with no real help from the government. You also learn how a family-- rather bizarrely comprised of a mother with dementia, a retired traffic cop grandfather who seldom speaks, a twentysomething bodybuilder son who's in love with a woman bodybuilder in her late fifties, and a daughter who still longs to be a big city crime reporter-- live together, argue with each other, and (most importantly) love each other. And I didn't even mention the sister who's a transsexual former beauty queen and erstwhile computer hacker who refused to move out of the city. As I read each Jimm Juree novel, I wonder if a dysfunctional family like that can love and support each other, why do so many "normal" families have such a problem doing it?

With family members like these, you know that Cotterill is playing it for laughs, and there are plenty of those. One of Jimm's part-time jobs is as a translator for anyone who wants their signs accurately translated from Thai to English. Each chapter heading is an example of a poorly translated sign, and they alone are worth the price of admission. Then there's Jimm's ongoing correspondence with Clint Eastwood. She's determined to sell him a screenplay, and I love watching her try to make her dream come true.

Cotterill ups the anty in The Axe Factor with two things: a thinly veiled version of himself as Conrad Coralbank, and pages from a serial killer's journal that are truly chilling. No laughs where those pages are concerned because Cotterill can do scary very well, too. As Jimm falls deeper under Coralbank's spell, and as her grandfather becomes more suspicious, those journal pages are enough to really make readers fear for Jimm's life-- and it's a life that we become better acquainted with in this book, particularly her insecurities.

The Axe Factor is the perfect blend of chills and laughter-- and one of the best examples of misdirection I've ever read. It also ends with a nice little cliffhanger. On the surface, Cotterill's books all appear to be light and breezy, but don't be fooled; there's real depth to be found in them as well. I make it a habit never to miss a single one.