May You Live in Interesting Times Weekly Link Round-Up 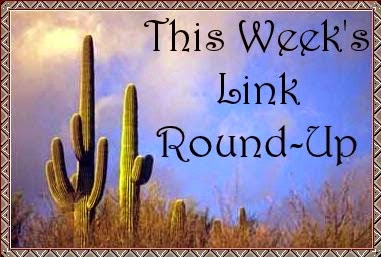 It's been an interesting week, mostly spent on the phone trying to unsnarl, untwist, and untangle two different messes (neither of which were my fault). The Poisoned Pen author event for Faye, Jonathan and Jesse Kellerman was rescheduled due to a huge storm system that moved in. While I was at the dentist, Phoenix received yet another torrential downpour. Thankfully it was of short duration, but I still had my fingers crossed as I navigated the Jeep through flooded streets. I got home to see that the property had narrowly escaped being inundated. Again. But hey-- my pearlies are nice and white, and that chipped incisor was repaired!

That's all for now. Don't forget to stop by next Friday when I'll have a freshly selected batch of links for your surfing pleasure. Have a great weekend!