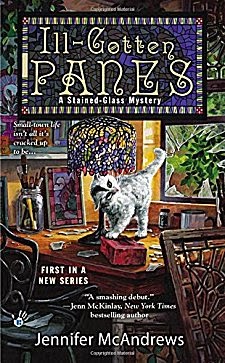 First Line: For generations, my family followed a simple principle: If everything goes wrong, go back to the beginning.

After having lost her job and her fiance, Georgia Kelly has left the Big Apple and retreated to the one place she's always felt safe: her grandfather's home in Wenwood, New York, a crumbling small town that's on the verge of going under for the third time. There's only one thing that can keep Georgia's mind off her job search-- her grandfather is accused of murdering the owner of the local hardware store. The police in town seem to be third-string Keystone Kops, so Georgia feels obligated to conduct her own investigation in order to save her grandfather from a prison sentence.

Author Jennifer McAndrews has the bare bones of what could turn into an excellent cozy series-- an appealing young heroine, an adorable kitten, a quirky best friend, and an eccentric grandfather. In a departure from the usual dream-come-true small town, McAndrews has created Wenwood. Wenwood was once a thriving town, but with the closure of its brick factory and the horrific national economic downturn, it's barely surviving. The series could receive quite a boost if Georgia and the other residents band together to save the town.

McAndrews has also written a fine mystery that kept me guessing, but then less positive things begin to rear their ugly heads. The "hook" of this series is that it's supposed to be one in which stained glass plays an important role. It certainly doesn't in Ill-Gotten Panes. The pitifully few scenes are certainly interesting, but you could also excise them from the book, and you'd never be able to pinpoint where they'd been. I will cut some slack for that because Georgia does say that everything in her life at that point must be put on hold until her grandfather is cleared of murder.

But speaking of her grandfather and the rest of the characters, most of them are so unlikeable that I really have no desire to pay a return visit to Wenwood. Her grandfather is a crotchety old cuss who drives his employees to distraction and is usually downright nasty to his granddaughter. Georgia's new best friend Carrie takes a shine to her for no reason at all-- Georgia's charm isn't exactly in evidence when they meet-- then hits our heroine up for a favor and gets contrary about the kitten Georgia's become attached to.

In addition it would appear that the economic blight in Wenwood has turned everyone into rumor-mongering grumps. Georgia's turned out of more than one business just because her grandfather has been accused of murder. Even the hunky contractor who's trying to turn the old brick factory into a marina to save the town has his anti-social moments.

Combine a hook that goes nowhere with a passel of unlikeable characters, and you have the beginning of a series with which I'm not quite sure I want to continue... even though there is true promise in those pages.