Remains of Innocence by J.A. Jance 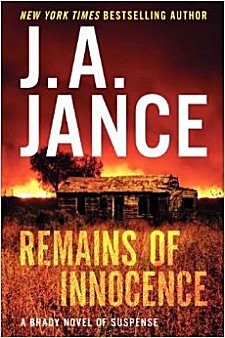 First Line: Liza Machett's heart was filled with equal parts dread and fury as she pulled her beater Nissan into the rutted driveway of her mother's place, stopped, and then stepped out to stare at the weedy wasteland surrounding the crumbling farmhouse.

In short order Cochise County Sheriff Joanna Brady finds herself racing to solve two cases, and one of them strikes very close to home. Junior Dowdle, a developmentally disabled man in his sixties diagnosed with dementia, has been experiencing violent episodes. When his body is found at the bottom of a limestone cavern on the outskirts of Bisbee amongst the remains of tortured and mutilated pets, Joanna is stunned. She knows Junior's foster parents very well and has always considered Junior a friend. Generally a very sweet and kind man, could Junior be responsible for the deaths of those animals?

She's barely had time to begin investigating Junior's death when she and her team need to work on another case. Back in Massachusetts, Liza Machett began clearing out her deceased mother's house to get it ready for sale. After her father abandoned them, Liza and her stepbrother experienced a life of grinding poverty, squalor, and schoolyard ridicule with their mentally unstable hoarder of a mother. Imagine Liza's surprise when she begins clearing out stacks of books and magazines and discovers a fortune in $100 bills hidden between the pages. For diner waitress Liza, the money is a blessing-- until her apartment is broken into, her mother's house is torched, and her landlady is murdered. On the run to save her life and to find some answers, Liza heads right to Cochise County, Arizona, and Sheriff Joanna Brady.

There's nothing quite like reading one of Jance's Joanna Brady books while staying in Bisbee, Arizona. All I had to do is step outside the door to see I was right in the heart of these books. Having grown up in this old mining town, Jance's setting is pitch perfect and one of the reasons why I love these books.

Another reason I love these books is the characters. Joanna is brave, intelligent, and compassionate, and these books have shown her growth from grieving widow to sheriff to sheriff at the beginning of a second marriage. Joanna can also be opinionated and stubborn, and her relationship with her mother is anything but harmonious. In other words, she's human.

The people Joanna lives with and works with have become like friends as I've made my way through this series. When Junior was diagnosed with dementia in an earlier book, I got tears in my eyes. Yes indeed, I am invested all the way to my eyebrows in this series.

A perfect setting and characters that wind themselves around your heart are all well and good, but they need a good mystery to show them in their best light. In the case of Remains of Innocence, one mystery is stronger than the other. It didn't take me long to deduce what had really happened to Junior, but Liza's part of the book kept my interest from beginning to end. Jance has a way of knowing just how to make a character so sympathetic that you want to invite them in for coffee and a long talk. She's done her usual excellent job with Liza and those $100 bills.

Innocence is a theme that runs strong throughout this book. People who never lost their innocence; those who lost it much too early. People who should be innocent who aren't; and those who look guilty... but aren't. There's good food for thought in Jance's latest Joanna Brady mystery-- yet another reason why I love this series.