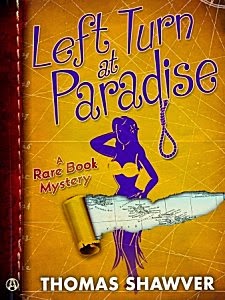 First Line: I still see him before drifting off to sleep.

Michael Bevan has done everything he can think of to keep his used bookstore afloat, and just when he thinks he's going to have to call it quits, he takes another look at one of his finds. What he realizes makes his jaw drop-- the timeworn diary which dates back to 1768 looks to be a sailor's chronicle of the first of the three voyages the legendary Captain Cook made through the Pacific islands. If it's as valuable as he thinks it is, selling it may keep his bookstore open for another year.

When he meets a pair of London book dealers who claim to have the journal of Cook's second voyage, all three begin to speculate about a third which would tell all about Cook's third and final voyage when he met his death in Hawaii. All three volumes would be the nonpareil of Pacific exploration. Before Mike can take any action, the two journals are stolen, and he and the two London dealers find themselves on a deadly quest that takes them all the way to the Southern Alps of New Zealand.

Author Thomas Shawver knows how to grab my attention. Of course a book lover like me would like to read about an antiquarian bookseller, and Michael Bevan is just the sort of nuanced character that I like to follow. For being such a good guy, he's still made plenty of mistakes in his life, and he's still paying for some of them-- especially where his daughter is concerned. But he is trying, and he is also working hard to keep his bookstore a going concern.

Where Shawver really grabs my attention in Left Turn at Paradise is with the prize at the end of the chase: those three journals describing the voyages of Captain Cook. I came very close to drooling over the very thought of such books existing and of what a media sensation they would be. (I could even see myself buying my own copies if they were published.) As you can see, my imagination was well and truly hooked.

Where I began to slip off the hook was when Bevan and the other two dealers made their way to a secret Maori compound high in the mountains in New Zealand. The entire scenario was a bit over the top for me and severely strained my credulity with the leader of the Maori group and the actions of his minions. Be that as it may, I still found this book to be an enjoyable read, and I'm definitely looking forward to the next in the series.