Buried in a Bog by Sheila Connolly 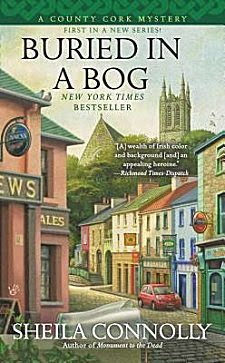 Although Maura Donovan had no personal desire to visit Ireland, she had to honor her late grandmother's wish. Once in the tiny village of Leap in County Cork, in no time flat she's found herself a place to stay, she's visiting her grandmother's friend daily, she's found herself a job at the local pub, and she's driving past when the local police are pulling a body from a bog.

Although she's busy pulling pints for everyone coming to see the American and to talk about the nearly one-hundred-year-old bog body, Maura realizes that she may actually have information about the dead man. Whether she likes it or not, she might wind up in the middle of a murder investigation.

To be completely honest, I was surprised by just how much I enjoyed this book. Buried in a Bog has an unexpected depth that warmed the cockles of my heart and has me wanting to pick up the next book in the County Cork series as fast as I can.

It relies on a strong sense of place, and Connolly delivers. I truly got the sense of village life in Ireland, of how the people interact, and even of some of the history-- such as how children are traditionally named-- and absolutely none of this is conveyed with a phony Irish brogue.

We discover all this along with Maura-- a young woman whose life has been circumscribed by love, loyalty, and lack of funds. Being raised by her grandmother, Maura had no chance (and no inclination) to go to college. She's worked hard and lived in the tough neighborhoods of South Boston her entire life and has seldom gone more than a few miles outside the area. This trip to honor her grandmother is momentous on many levels. A different country, different customs, different laws, strange people, learning to drive a manual transmission car on the "wrong" side of the road... we experience all this with her.  What's so marvelous about it is that Maura doesn't expect things to be just like they are in the United States.

Maura isn't the easiest character to grow to like. Living in an impoverished area and working a series of dead-end jobs has left her suspicious of strangers and their motives, which means she often starts off on the wrong foot with the villagers of Leap. She can also be a bit of a whiner, and at other times she can be kind and compassionate. I grew to like her as I learned more about her-- and I didn't think I would because Maura and I have some glaring differences!

To add to the strong sense of place and a very interesting main character, there is a cast of secondary characters that I can see taking turns in the spotlight. The icing on the cake is a well-plotted mystery that kept me guessing all the way through.

Yes indeed, I can strongly recommend Buried in a Bog, and I can't wait to get to book two in this series!