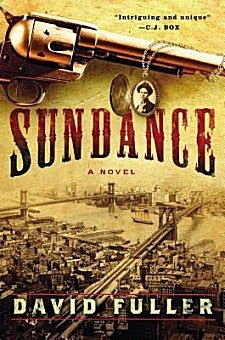 First Line: He stepped through the arched grillwork gate and into free sunlight for the first time in twelve years.

In 1908, newspapers around the country reported that infamous bank robbers Butch Cassidy and the Sundance Kid were killed in a shootout in Bolivia, and that was that. The legend could grow; other outlaws could pretend to be Robert Parker (Butch) and Harry Longbaugh (Sundance) and hope some of their fame would rub off. But that's not quite what happened.

In 1913, Harry Longbaugh walks out of prison in Rawlins, Wyoming, after serving twelve years under an alias. Even in tiny Rawlins, Longbaugh can see that the world has changed while he's been behind bars. Noisy, smelly motor cars are taking the place of horses, and electricity has overtaken the hiss of gaslights. Regardless of how the world has changed, Longbaugh has one objective in mind: to find his wife, Etta Place. It's been two years since he's gotten a letter from her, and he's not going to rest until he finds her. Her trail leads him all the way to New York City, and despite the city's size, crowds, and confusion, Longbaugh has to find the woman he loves before his legend has a chance to catch up with him and kill him.

One of my favorite films as a teenager was "Butch Cassidy and the Sundance Kid." I watched it so many times that I still have large sections of the dialogue memorized, so I was drawn to David Fuller's novel like the proverbial moth. Once I began reading, I fell headlong into the story. Watching Longbaugh make his first halting acquaintance to the new world around him felt true to his character and true to the period. As he tries to find Etta in the land he knows so well, he has time to ponder many things. Has he truly paid for all the crimes he's committed? What about the men in the gang who were never caught-- do they still have a debt to pay, or are they the better men for having not been imprisoned? He's also surprised that Etta has gone off to live her own life; in his mind she's like a fly suspended in amber, waiting for his return.

New York City intensifies the feeling of being displaced in time. Here crowds protest working conditions, and women are fighting for the vote, and it doesn't take him long to realize how much danger he's in while he searches for his wife because strong-minded Etta has made some enemies.

Sundance is a novel that satisfies on many levels. Although it's nowhere close to being an imitation of William Goldman's screenplay, Longbaugh will feel familiar to anyone who knows the 1969 film. It succeeds as a Western, particularly in the beginning just after Longbaugh is released from prison. It certainly succeeds in the mystery and adventure departments as he searches for Etta, and it is also quite the love story. Moreover, Sundance succeeds as the story of a man who finds that-- although he has so much life experience-- he still needs to seek his place in the world. David Fuller immersed me so completely in Harry Longbaugh's world, that it was a wrench for me to leave it.