Death of a Mad Hatter by Jenn McKinlay 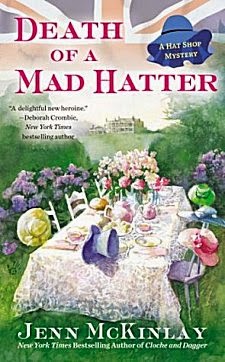 First Lines: "Take it off, Scarlett. You look like a corpse."

Although Vivian and Fee are busy designing hats for a society wedding, they just can't say no when the customer service side of the business-- Viv's cousin Scarlett Parker-- tells them that the wealthy Grisby family has come to Mim's Whims on Portobello Road in London to ask them to design the hats for an Alice in Wonderland themed afternoon tea. The tea is a fundraiser for a local children's hospital, and Viv and Scarlett know they can't pass up the opportunity to advertise their hat shop. Unfortunately the head of the Grisby family dies at the tea, and when traces of poison are found on the hat Vivian designed, the police come straight to Mim's Whims for some answers.

Jenn McKinlay can always be relied upon for a fast-paced, fun read that can make readers laugh, and Death of a Mad Hatter is no exception. The added bonus in this London-based series is that she gets to educate American readers just a bit in all things British. From British inheritance laws to British slang to those wildly improbable fascinators, it's obvious that the author is having fun flexing her muscles on the other side of the pond. Although two of her British characters do make minor slips-- in the UK the second floor is really the first floor, and mothers are called "Mummy" not "Mommy"-- these were probably done for the sake of clarity, and unless the reader is a rabid Anglophile (mea culpa), they won't even be noticed.

In this second book in the series, McKinlay delves a bit more deeply into the personal relationships of her characters. Despite all her attempts to draw out her cousin on the subject of her private life, Scarlett can't learn a thing about the mysterious Vivian. We learn a bit more about Viv's assistant Fee, and Scarlett pays so much attention to dishy business manager Harrison's personal affairs that she starts acting like a fifteen-year-old instead of a woman in her late twenties. In fact, Scarlett's behavior detracted from the story to me.  Yes, she's a free spirit with great people skills, and she knows how to stand up for herself, but Scarlett becomes a loose cannon when her hormones are involved. More than once while reading Death of a Mad Hatter, I wanted to tell Harrison to run away as fast and as far as he could.

How was the mystery in this second book? I guessed one part of it fairly early, but the other part was a surprise by book's end, and I like that. McKinlay provides plenty of laughs, plenty of twists and turns, and quite a few romantic sparks. I just hope that Scarlett can maintain better control over herself in book number three.