Death of an Englishman by Magdalen Nabb 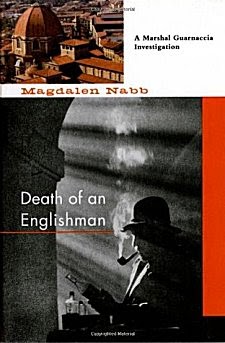 First Line: The small office was in darkness, except where the red night lamp stood by the telephone on the desk, and the white kid gloves lying on top of a sheaf of papers within the patch of light were flushed pink.

A respectable retired Englishman has been shot and killed in his apartment on the Via Maggio near the Santa Trinita bridge in Florence, Italy. It is a few days before Christmas, and flu is making the rounds of the Florence caribinieri. Marshal Salvatore Guaraccia has quite an assignment ahead of him: recover from the flu that has him experiencing fever dreams while flat on his back in bed, solve this case, and get on the train to Sicily so he can celebrate Christmas with his family. Fortunately (or perhaps not), Scotland Yard has dispatched two  officers to assist in the investigation.

At first, I was somewhat stunned when I realized that most of the action in this book would take place while the marshal-- the main character-- is flat on his back in bed. But then I fell under the spell of Magdalen Nabb's Florence. This slim volume contains an entire feast of the streets and neighborhoods of the city, of the Italian way of life, of the keen observation of people's behavior and habits, that I willingly let Guaraccia recuperate while I did my own observing and putting clues together.

Part of the magic of this book is having two Scotland Yard detectives working with the Italian caribinieri. There is the difficulty of not speaking each other's language as well as the differences in investigative procedures. While I watched this group of policemen slowly piece together facts that show the deceased Englishman wasn't as respectable as they first thought, I put together what I'd observed. Nabb is masterful at using Conan Doyle's Holmes and Watson Method: the Italian and British police being Watson, the marshal being Holmes, and the reader somewhere between the two.

First published in 1981, Death of an Englishman, isn't a foray into the dazzling science of forensics. This is a mystery for those who like to observe, ponder and arrive at their own conclusions. How close your deductions are to the author's solution depends on how well you've observed and pondered a disparate group of people all living in the same old apartment building.  A batty old Englishwoman operating her own museum, a husband who always seems to be coming home during the wee hours of the morning, a high-spirited little girl (who reminded me more than a little of "The Ransom of Red Chief"), and several more should provide readers with everything they need to know... but it's not until Marshal Salvatore Guaraccia has recuperated sufficiently that everything falls into place. He proves that there's scarcely a thing that can escape his eagle eye.

The setting, the characters, the intricately constructed plot with its touches of humor and compassion... Death of an Englishman is a leisurely-paced book that I enjoyed even more than I'd anticipated. I look forward to returning to Florence and observing the marshal in the future.