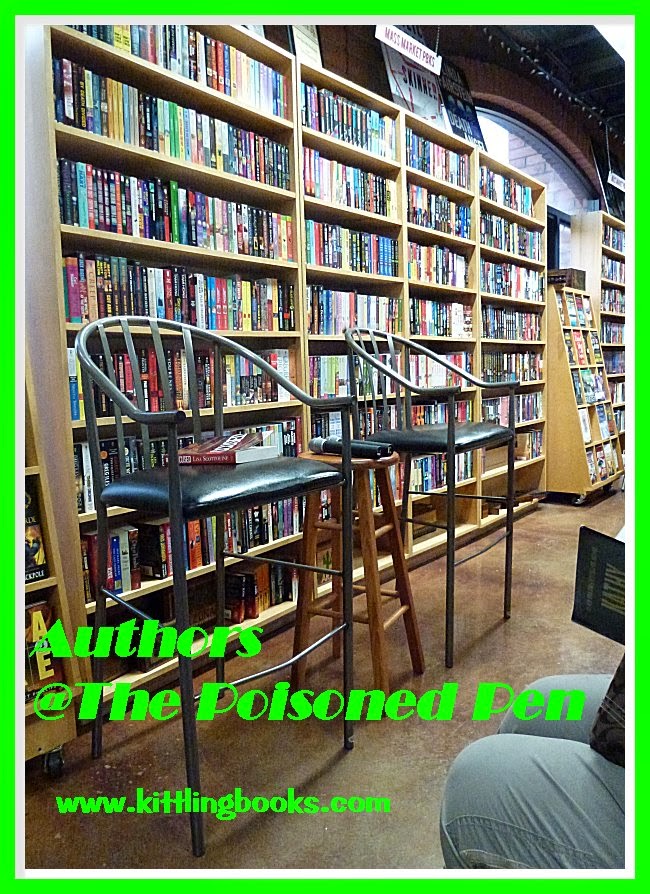 The very next day after seeing and chatting with Denise Mina, Denis and I found ourselves on the road to our favorite bookstore, The Poisoned Pen. This time we would be seeing C.J. Box, author of the excellent Joe Pickett series set in Wyoming.

When we arrived (well ahead of time as usual), we found the staff hard at work trying to configure a new seating plan. Mid-March is jumping in the Phoenix metropolitan area with spring training and spring break. The purchase of forty more chairs meant that the seating capacity for the small store would be raised to 150. They just needed to plan the best way to set them up!

In no time at all, the chairs were in position, and Denis and I had prime viewing locations. People were already coming in to claim seats and then walk to nearby restaurants to eat before the event. By the time everything was ready to roll, it was standing room only.

"Congratulations on 25 years! This is my eighteenth..."

Bookstore owner Barbara Peters introduced C.J. Box and Robert England, a writer for the Arizona Republic who would be interviewing him. Occasionally Peters turns over the interviewer's role to someone else because she "doesn't want to be the one who talks all the time." She went on to tell us about a time when Lee Child, author of the Jack Reacher books, came to town. "So many came that we actually had to start turning people away. One man was very upset when this happened and to retaliate, he told everyone 'I don't mind. That woman owner talks too much!'"

C.J. appeared to a big round of applause and took his seat. "I want to congratulate The Poisoned Pen on twenty-five years," he said. "This is my... (counting quickly) eighteenth trip here!"

Talk immediately turned to Box's latest Joe Pickett novel, Stone Cold, which has an opening scene about people trying to buy up the landscape. "Are you upset about that?" asked Robert. "I am if they're jerks!" Box exclaimed. In this novel, Joe is sent to the remote Black Hills of Wyoming to check out the doings at a massive ranch where there are rumors of contract killers.

Joe isn't a traditional game warden anymore. In fact, the governor calls him "Range Rider." But he's still the Joe Pickett we know and love because-- although he doesn't know how not to get involved-- he has learned to exercise restraint. Joe still feels regret over the times in the past when he didn't.

"In a cage fight between Joe and Nate, who would win?" asked Robert.

And in speaking about Nate, Box told us that Stone Cold contains a brutal scene featuring Nate that was fun, and cathartic, for him to write. C.J. likes the relationship between Nate and Joe and doubts that Nate will ever get his own series.

In the fifth book of the series, Out of Range, Joe was attracted to another woman... and his wife Marybeth was attracted to Nate. After that novel was published, Box was chewed out by some female fans for Joe's behavior. When Box asked the women, "But what about Marybeth?" they replied, "Oh, but that was Nate!"

And right then and there, C.J. smiled and hinted, "There's almost a sex scene in Stone Cold!" He once attended a convention where authors were being asked about writing sex scenes. When his turn came, he quipped, "My character's married; there is no sex." Unfortunately, his remark was picked up on the national wire, and when his wife read it, she "was not pleased with my cheap joke."

In a brief discussion about carrying guns, Box said it's a complex issue and mentioned a little-known fact about the Aurora, Colorado, shooting in the movie theater: "The shooter bypassed three theaters until he found one with big signs out front proclaiming NO FIREARMS. He wanted to know that he was someplace where no one could return fire."

Robert noted that Box often deals with political issues in his books. C.J. agreed, telling us that although Joe doesn't take sides, he has proponents of both sides of the issue represented in the book-- and he then trusts his readers to choose the right side.  "I do not care for writers who have an agenda," he said.

Box can sometimes find himself in interesting situations while doing research for his books. Like the time he climbed a cold, oily ladder to the top of a wind turbine ("Why aren't there elevators in those things?") to see how you could carry a body to the top.

When C.J. was about to begin writing Blue Heaven, he'd just finished reading Laura Hillenbrand's Seabiscuit, and he knew he wanted to set a scene at the Santa Anita racetrack. He was polite and wrote a letter to the racetrack officials, introducing himself and outlining what he needed. He never heard back from them, so one day when he was in the area, he took a taxi to the track. It was the off-season, and the entire place was deserted, but he opened an unlocked gate and walked in. After wandering around for an hour, he had everything he needed.

Robert then asked him about Yellowstone National Park. Box told us that he has set three books in Yellowstone. He loves the culture inside the park. Having a book signing there each year can be a humbling experience. Sitting where park employees have stacked all his books in the Old Faithful Inn, it seems like "every third person stops to ask me where the bathroom is, or when Old Faithful is going off."  He also remembers one fan who evidently got his authors' wives mixed up: "I knew your first wife, Judy, you SOB," the fan spat at Box before stomping off. (As far as I know, Craig Johnson is the Wyoming author with a wife named Judy!)

Asked what Indian (Native American) readers thought of his novels, Box said, "Several Indian readers have told me that they like my portrayal of Indians and life on the reservation."

Who are C.J.'s Western writer influences? "Definitely A.B. Guthrie. I'm also an Edward Abbey fan. I like to read books about the outdoors as well as being outdoors." Which reminded him of some writing advice he was given: "Never start a book with the weather, and leave out the parts that readers skip."

Up on the Screen & On Writing

The film rights to Box's novel Blue Heaven have been renewed five times by the same people, so "it's like getting paid for not making movies." C.J. also went on to say that he would prefer the "hands off" approach rather than being closely involved in making a movie or television series. Speaking of television, Robert Redford is actively pitching Box's Joe Pickett books as a television series.

Whenever a writer's work is being considered for the big-- or small-- screen, he's always asked which actor he sees being cast as the main character. "I never think of Joe as an actor. When I described him, I described him as 'lean, of medium build,' and that's it."

Box took a moment to praise Robert for his interviewing technique and for his questions: "There's being interviewed... and there's being machine-gunned!"

Robert: "For a weekend, would you be Nate or Joe?"

C.J.: "That's the first time someone's asked me that. For a weekend? Nate!"

Box is currently working on a standalone novel (the working title is Badlands) that features the character Cassie Dewell from The Highway, and a short story anthology, Shots Fired, will be released this summer. (Which will be his nineteenth visit to The Poisoned Pen-- "I'd hate not to come to Phoenix in August again!") With Joe Pickett, standalone novels, and anthologies coming out so quickly, C.J. cautioned us, "I don't know if I can keep up with this writing pace forever. There is fishing, you know!"

Box writes in a basement office at home, and also in a cabin 2½ hours away. "I work in the darkest corner of the room so I can't be drawn away by the view outside the window. I prefer writing at the cabin, but I do work in the basement. I also write more in the winter than I do in the summer."

Talk drifted to book titles and cover art. Barbara Peters rapidly put on her editor's hat and said, "Authors do not have final say on titles or cover art." C.J. agreed, "It's more like 'Here's your cover. We love it, and we hope you do, too.'"

The evening drew to a close with talk about Box's last book, The Highway, which was quite a departure for him. What sort of feedback did he receive? C.J. replied, "Feedback was somewhat polarizing. It's the first time I was chewed out by a lot of female fans, but it was something that I wanted to do. My own mom didn't like it! I did gain new fans, though."

C.J. Box is laid-back and easygoing. It's so obvious that he enjoys spending time with his fans, that I recommend you go to see him if you ever get the chance. He definitely spun a little magic that night. When Denis came home, he immediately looked up the title of the first Joe Pickett book!