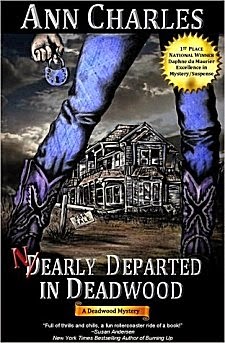 First Line: The first time I came to Deadwood, I got shot in the ass.

Deadwood, South Dakota, always seems to be a place of mixed blessings for single mother Violet Parker, especially when she has all the planning and organizational skills of Stephanie Plum. At the end of her financial rope, she's moved her young twins to the small town so they all can live with her aunt while she tries being a realtor. She's not had much luck with that either, and if she hasn't sold a house in the next three weeks, she can kiss this job good-bye. Just when an owner chooses her to sell his grand old Victorian house, Violet learns of something that she just can't ignore: three little girls have gone missing in Deadwood in the past year, and she's afraid her daughter may be next. Is there any possible way she can sell a house and keep her daughter safe at the same time?

I have an affinity for old mining towns, and the word "Deadwood" was the first thing to catch my eye about this book. Old mining towns have history; they have character; and they're often good places to set a story. I found that to be true here. Deadwood also has casinos, so there will be an ever-changing mix of familiar faces and strangers just drifting through to play the slots and to avoid a hand of aces and eights at the poker table. Charles did a first-rate job of highlighting Deadwood's quirky ambiance.

Ann Charles' voice and her sense of humor are the two things about this book that I absolutely loved. I lost count of the number of times she had me laughing as I turned the pages-- even when Violet's twins were up to some hare-brained scheme. (She's really going to be in trouble when these two become teenagers.)

As far as characters go, Violet is 95% of the show, and although she had me won over from the first line, I would've liked to see other characters-- like her aunt-- featured a bit more. One of the characters at Calamity Jane Realty, however, highlight one of the unrealistic parts of the story. One of the realtors is a smarmy buzzard who wants Violet to fail so he can practice a bit of nepotism. His constant stream of sexual innuendo makes me wonder what cave he was hiding in when all the emphasis against sexual harassment in the workplace was being explained. Not only that, but Violet puts up with it, so there's something wrong with her, too.

It also seems as though Violet's the target of every man's salacious thoughts there in Deadwood, and if you enjoy romance in your mysteries, you're going to find plenty of it here, with handsome men both wanting to sell and buy houses from her-- and to keep Violet entertained in other ways. A word of warning: the amount of detail in a romantic encounter goes well above what is usually found in the typical cozy. It's not graphic, but be aware just in case you need to turn on a fan as you read that chapter.

I did find this book to have a slow-moving start, and I really don't think a small town would be quite so blasé about three missing girls as Deadwood residents appeared to be. There's also a tiny bit of the paranormal added at the end that really wasn't necessary; Violet's confrontation with the killer was chilling and well-written to begin with.

I'm finding several things to be picky about, aren't I? Yes, there are some problems with Nearly Departed in Deadwood, but the writing style and the humor were so enjoyable that I was willing to overlook a few details. I'm also more than willing to go to Deadwood and visit with Violet again. Let's face it: I love old mining towns, and I love to laugh.

Humorous Mystery, #1 Deadwood mystery
Rating: B-
Source: Purchased as an eBook from Amazon.