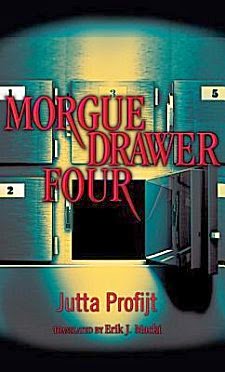 First Line: I hope you'll read this account from top to bottom because it's the whole truth and nothing but the truth, and so on-- eh, I'm sure you've heard the saying.

If a person is shy and meticulous like Dr. Martin Gänsewein, the job of coroner is perfect. He can autopsy bodies in the Cologne morgue, order labwork and tests, and not be worried about any of his "patients" talking back to him. That is, until  young car thief Pascha Lerchenberg moves into morgue drawer #4. Once Pascha realizes two things-- (1) that his death has been labeled an accident, and (2) that Gänsewein is the only person who can hear him-- he won't leave Martin alone. Why? Because Pascha doesn't want his death to be remembered as a drunken accident. He was murdered, and since he can't prove it, it's up to Dr. Martin Gänsewein to do it for him.

Author Jutta Profijt has taken a quirky, offbeat idea, developed it, refined it, and served it up to perfection. The combination of cultured, intelligent, shy Dr. Martin Gänsewein and the boisterous, profane and practically illiterate Pascha Lerchenberg is the best pairing since Oscar Madison and Felix Ungar. There is also a stronger than normal sense of reader participation in the book. What do I mean by that? Working together as a team understandably takes Martin and Pascha quite a bit of time, and while Martin is working through the stages of avoidance, denial and acceptance and Pascha is figuring out what he can and cannot do, the reader can pick up the trail of clues these two characters need to follow.

At first Pascha is not a very likeable character. He has a completely selfish view of the world, and his limited skills center around grand theft auto. His desires and his impulses are the center of his universe. What is fun to watch is how he very slowly begins to change as he spends more and more time with intelligent, detail-oriented, true blue Martin. Pascha starts seeing the world from a very different perspective, and he even makes a concerted effort to improve his vocabulary. Of course, once Martin gets over the feeling that he's gone insane, his blinkered world view begins to expand as well, and it's amazing to see the lengths this reserved, almost innocent man will go to in order to bring a killer to justice.

I expected this book to be witty and funny-- and it is. I was surprised by how involved I became in the action and by how touching many of the scenes were. Erik J. Macki's work is superb, picking up many nuances that often get lost in other translated books. Morgue Drawer Four is a humorous mystery with unexpected depth, and I really look forward to reading the other "Morgue Drawer" books. My only reservation is that a premise like this may not be strong enough to support a long-running series. Sometimes short and sweet is best.