Meet Me in Malmö by Torquil MacLeod 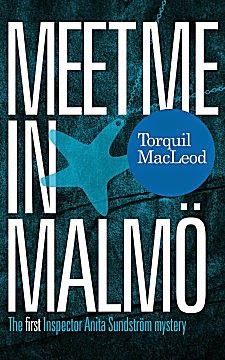 First Line: It was the sound of the sickening thud that he would never be able to erase from his memory.

When Ewan Strachan attended Durham University, he had dreams of fame, money, and glory. Now he's a second-rate hack at a third-rate magazine in Newcastle, hating his boss and wondering what happened to his life. When he meets Mick Roslyn, a former college friend and currently the hottest film director in Sweden, he can't believe his luck when Roslyn wants him to come to Malmö for an exclusive interview. Ewan's boss is so thrilled that he stumps up the money to send him over there.

When Strachan arrives at Mick's apartment, he discovers the body of Mick's murdered wife, and the eyes of  the Swedish police are upon him. One of those police officers is the very attractive Inspector Anita Sundström who now has charge of an investigation filled with clues and suspects. Was Strachan set up, or is he really the killer? It's a question Sundström has a personal interest in answering.

Torquil MacLeod has written a fast-paced mystery with two engaging main characters. Yes, Ewan Strachan never has reached his full potential, but he's a bit of a charmer, and it's easy to forgive him a failure or two. In fact, the reader wants him to make a complete success of his interview with the famous film director and his beautiful movie star wife-- after all, Ewan's got the inside track, doesn't he?  In her own way, Inspector Anita Sundström is just as appealing. She's a bit of a loner, having tired of the dating scene, and she's dedicated, hardworking, and just doesn't know when to quit.

If you like mysteries with more twists and turns than Lombard Street in San Francisco, Meet Me in Malmö is the book for you. I had an idea about the killer's identity from the very beginning, and I enjoyed seeing how that idea held up as the pages turned. As good as the plot twists were, I have to say that the ending-- with that last shocking volte-face-- was very abrupt. It almost felt as though the author had written one very long novel and decided that this was the best place to divide his manuscript into two books. Some readers may be put off by that ending, but it made me want to read book number two.

Do you enjoy crime fiction set in Scandinavia? Torquil MacLeod has written three Anita Sundström books, and I fully intend to read them all.