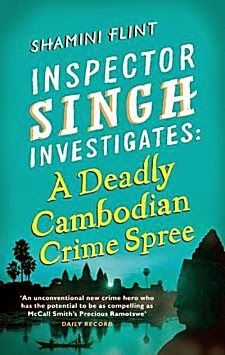 First Line: My feet sink into the mud as if it is quicksand.

Inspector Singh's superiors have sent him to Phnom Penh, Cambodia, as an observer to the international war crimes tribunal. As far as he's concerned, he'd much rather be home in Singapore. Then a key witness at the tribunal is murdered, and Colonel Menhay of the Cambodian Police asks Singh to be assigned to the investigation. It doesn't take long for the portly inspector to realize that the roots of this homicide reach all the way back to the horrors of the Cambodian killing fields.

I have enjoyed each book in this series for the character of Inspector Singh and for the depiction of areas in Southeast Asia that I probably will never see. A Deadly Cambodian Crime Spree contains what I've learned to love about Shamini Flint's writing and then proceeds to take it to an even higher level.

It was Singh's life mission to tramp after the murderers in his snowy white sneakers, following the evidence and his instincts, ignoring the advice and warnings of his superiors, stopping only for regular meals, cold beer and the  odd afternoon nap, until he had ensured some justice for the dead.


Inspector Singh is his usual irascible self-- a man who loves his work, a man who appreciates time away from his ill-tempered wife, a man who manages to put up with his superior officers. In the eyes of those "superiors," policing is all about appearances, and the turbaned, overweight, chain-smoking, white sneaker-wearing inspector just does not fit their idea of what the police force in Singapore should look like. The only reason they don't get rid of him is because his success rate is so high. So they let him solve murders and hope as many of them as possible occur somewhere far away.

He remained a policeman under sufferance, his bosses always looking for an excuse to get rid of him. He suspected that deep down they feared someone whom they could not control, who valued a victim's right to justice more than the rules and regulations of the Force.


Part of the delight of reading these books is in seeing how Singh can circumvent the rules and regulations his superiors are trying to impose. He doesn't take shortcuts in interviewing witnesses or suspects, or in collecting evidence. He's just learned the best ways to avoid all those silly "for appearance's sake" rules.

What brings this book to an even higher level is its setting. Shamini Flint brings Cambodia's tragic history into sharp focus without being graphic about it. In imposing a radical form of agrarian socialism on his people, Pol Pot, his policies, and his henchmen were responsible for the murder of 25% (at least two million) of his country's people. Cambodians could be killed for wearing glasses or for being seen reading a book or for speaking a foreign language. By having Singh bear witness to the testimonies of those who survived at this international war tribunal, readers experience a tiny bit of the horror of the killing fields.

Once he's an official part of the murder investigation and helping Colonel Menhay, Inspector Singh learns that vengeance runs deep in Cambodian society. There are several suspects for this murder, but the truly mind-boggling part is in putting facts and supposition together in order to discover the true identity of each suspect, each person's motivation, and-- since the body count does rise-- exactly which suspect is responsible for the death of each victim. And always in the background is the serial killer who roams the countryside murdering former members of the Khmer Rouge.

If the phone had rung or if someone had knocked on the door while I was reading A Deadly Cambodian Crime Spree, I would have ignored them. I was totally engrossed in this story, and I had to see how Singh and Menhay solved the case. In the end, I learned that my involvement led to my ignoring Flint's subtly planted clues. The identity of one of the murderers shocked me-- and that was the icing on the cake. One of my favorite characters, an emotionally charged setting which both taught and entertained, and a truly puzzling case.  I highly recommend this book-- and the entire series.