The Son by Philipp Meyer 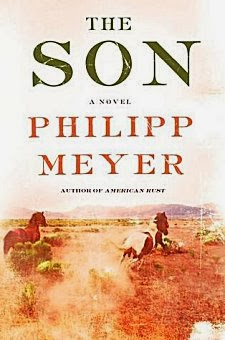 First Line: It was prophesied I would live to see one hundred and having achieved that age I see no reason to doubt it.

You just can't beat a sprawling multi-generational saga, and The Son is the best one I've read in a good long time. Author Philipp Meyer takes the McCullough family from the Comanche raids of the mid-1800s all the way through to the oil boom of the twentieth century. Once the last page is turned, the reader is left with the fascinating history of Texas, and the three indelible characters Meyer has created.

This story is told, in alternating chapters, from the points of view of patriarch Eli McCullough who, as a thirteen-year-old boy, was captured by the Comanches and raised as one of them; Peter, Eli's son, who comes close to eviscerating the empire his father created; and Jeanne, Eli's great-granddaughter, who presides over an inheritance that's changed from ranching to millions of dollars in the oil and gas industry.

This book is brutal, it's honest, and it doesn't flinch once. It's also one of the best Indian captive stories I've ever read. Meyer's eye for historical detail and vernacular speech is amazing, and although the book is long, it is never ever boring. In the beginning chapters, Eli's story almost completely overshadows those of the other two characters, but it doesn't take long for Peter and Jeanne to steal their share of the spotlight away from "the Colonel" (as Eli is known in later life). Each one speaks in his or her own distinctive voice, and the further along McCullough Road you travel, the more you want to know about each one.

As I've already said, this book is brutal, and it's honest. Meyer describes terrifying Comanche raids and the massacre of a Mexican family. If you don't like scenes of graphic (not gratuitous) violence, this may not be the book for you. If you don't like racial slurs being used, you're not going to like Eli very much. He is a man of his time, and he speaks as men did then. Meyer could not write about life on the frontier and avoid either the violence or the language and have his story remain true.

Normally when I read a book, I like to care about at least one of the characters. I didn't find many to like in The Son, but that didn't matter. I was completely swept away by the author's powerful narrative, and by book's end I was shaken and almost felt as though I'd lived through some of those chapters myself. There's no other way to say it: Philipp Meyer is one hell of a storyteller, and I'll be keeping watch for his next book.

Historical Fiction, Standalone
Rating: A
Source: Purchased as an eBook from Amazon.