The Outcast Dead by Elly Griffiths 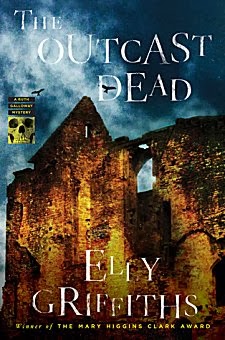 First Line: "And we ask your abundant blessing, Lord, on these, the outcast dead..."

Forensic archaeologist Dr. Ruth Galloway likes the Service for the Outcast Dead-- prayers said for plague victims, paupers, and prostitutes who were buried in mass graves-- but this time she has another reason for attending the service at Norwich Castle. She's almost positive that she's uncovered the remains of the infamous child murderer known as Mother Hook. Her boss is thrilled, and before she can blink she finds herself in front of the cameras for a television series called "Women Who Kill." It's not all bad, since she gets to work with the handsome and intriguing American historian, Dr. Frank Barker.

In the meantime, Detective Chief Inspector Harry Nelson is working the type of case he dreads. A woman's third-- and last-- child has died, and Harry believes she's killed all three of her children. Before he can find definitive proof, children begin to go missing, and notes are left behind by someone self-styled "The Childminder." It's just the sort of case that strikes terror into the hearts of every parent.

This series is one of my favorites, and The Outcast Dead is the best so far. Griffiths continues her theme of parenthood with two storylines. Mother Hook is an infamous Victorian child murderer who is alleged to have killed at least twenty children in her care and sold their bodies to the resurrection men (grave robbers who sold corpses to medical schools). Against everything, Ruth believes the woman to be innocent, and the reader gets to follow along as she finds information and pieces things together. The second storyline with a mother accused of killing her three children as well as the child abductor is DCI Harry Nelson's bailiwick, and suspense builds as his team tries to find the truth before any more children disappear.

As good as the storylines are, I have to say that Griffiths' cast of characters is superb. Ruth is intelligent and strong, but she's also a single mother who's been living in a sort of limbo. Her house is out in the marshes-- neither land nor sea. She's neither married nor single, really, since she has a very young daughter. She's written a book, but it's yet to be published. It was good to see that there may be changes afoot for one of my favorite characters.

Although Ruth is the star of the series, this is very much an ensemble cast. The father of Ruth's daughter, DCI Harry Nelson, is very much married, and we get to see how these people deal with their mistakes because they certainly haven't been swept under the rug. As Nelson works his cases, readers get to know the team of police officers who work with him, and their lives begin to figure more strongly into each book. This small group of characters have formed a very modern sort of family-- dysfunctional at times, but capable of working together with energy, intelligence, and compassion.

In the mood for a little history, two good mysteries, and a cast of characters so real that they feel like family members? I highly recommend Elly Griffiths' Dr. Ruth Galloway series. I can't get enough!