@ The Poisoned Pen with Denise Mina! 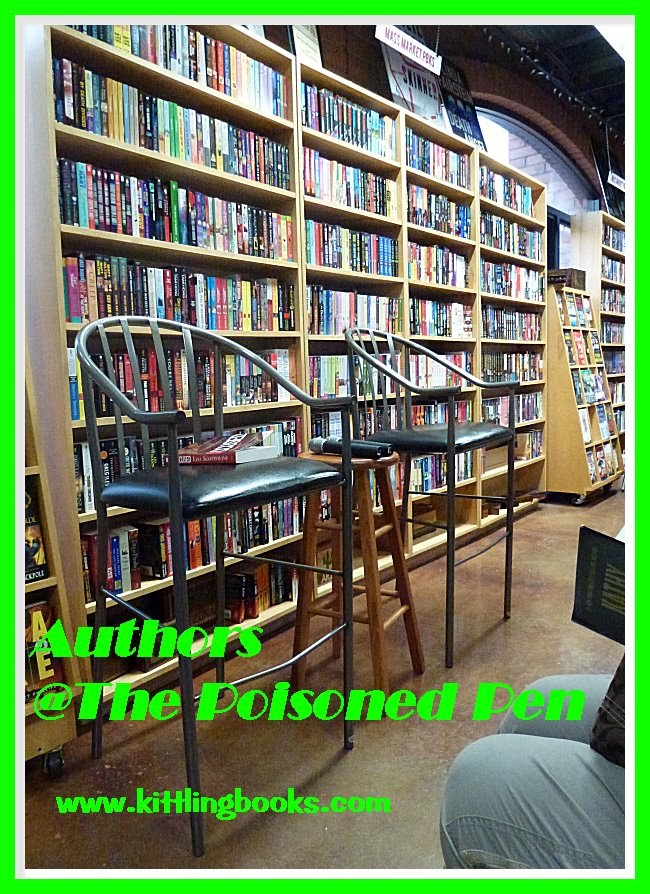 As we were driving to the event at my favorite bookstore, The Poisoned Pen, I said something to Denis that undoubtedly made him think I was a bubble off plumb. What did I say? Well....

I mentioned that one of the main reasons why I'd been looking forward so much to seeing Denise Mina wasn't just because she's one of my favorite authors, it was because I wanted to hear her speak.

"Homesick" was the best word I could find to describe how I feel when I don't hear Scots or English accents around me. (Watching British films and television doesn't always cut the mustard.) Now y'all are convinced that I'm certifiable, too-- aren't you? How can I be homesick for Scots and English accents when I'm an American who's lived in the United States my entire life? Don't worry. I think I'm a bubble off plumb, too-- and I have a spirit level to prove it.

"If the story's interesting, you don't need..."


There was an extra buzz of anticipation in the bookstore as bookstore owner Barbara Peters stepped out to say a few words. It was good to see that happy wanderer Barbara is still sticking to her resolution not to travel during The Poisoned Pen's twenty-fifth anniversary. Leaving us with, "I really wish I could wear my hair like Denise does, but with my limp locks I could use an entire container of mousse or gel, and it still wouldn't cooperate!" Barbara turned the evening over to Denise Mina and Patrick Milliken.

From hair to dress to shoes to jewelry, it was obvious that Denise is a person who follows her own drummer, and the second she opened her mouth, I was in heaven. Seriously... I could've kidnapped her just to have her read me all her books! Fortunately I'm not the kidnapping kind (and I didn't want to put her behind on the books she's writing).

Milliken began by congratulating her on her Theakstons Old Peculier Crime Novel of the Year Award for The End of the Wasp Season, and then talk moved to her last book, Gods and Beasts. "The book is based on a big sex scandal in Scotland," Mina told us. The scandal involved an extremely popular "man of the people" who was allegedly taking part in orgies in sex clubs. He sued the newspapers for libel and won. He was then charged with perjury and sent to prison. Two days before Gods and Beasts came out, the man was released from prison and proceeded to sue everyone for libel again. Denise had to rewrite her entire book to ensure that she would not be among those who were sued.

First published in 1998, Denise Mina won an award for that very first book, Garnethill, and the next two books in the trilogy put her on the map. Her next trilogy centered on Paddy Meehan, a young female crime reporter in Glasgow. That trilogy is the basis for a BBC television series called "Field of Blood," and the young actress portraying Paddy won a BAFTA Award for her performance. (I've watched it, and it's excellent.)

In talking about her series featuring Glasgow police detective Alex Morrow, Mina agreed when Patrick observed that Alex is more of a supporting or recurring character than she is a protagonist. "Yes, you could almost consider these books a series of short stories that interweave," Denise said. "If the story's interesting, you don't need someone having a breakdown in each book. It only took me seven books to realize that!"

The Red Road takes place around the night that Princess Diana died, a night that Mina calls the UK's "JFK moment."

"Regardless who you are or where you were, it seems that everyone wants to share what they were doing when they heard the news about Diana," Denise said. "There wasn't the same hysteria about her death in Scotland as there was in England, although we were sad that a young woman had died, leaving two wee boys without their mother."

Like Gods and Beasts, The Red Road is also based on a real criminal case, this one involving a police woman testifying that a thumb print admitted as evidence was not from the actual crime scene. The police woman was fired, but she could prove that she was right. She sued and won substantial damages.

Milliken mentioned something that I love about Mina's writing: "the amount of compassion that you show for the damaged characters." Denise thanked him and said, "I've found that fascinating ancillary characters give a fresh perspective to the story."

"I KNOW YOUR FATHER!"

Mina talked a bit about her home city of Glasgow. "Glasgow is a very mixed city. There are no gated communities, and only three suburbs where it's possible for you to live 'separately'. You meet people from all walks of life in Glasgow, and your circle of acquaintance can be a very wide one. I actually know of someone who was being chased by several thugs and managed to get away by screaming, 'I KNOW YOUR FATHER!' at them."

She continued to speak of her city: "Glasgow was a heavily industrial city, but after a forty-year recession, it became a very poor city and a center of radical politics.  At one time, The Gorbals was considered one of the worst slums in the world... until someone got the bright idea of moving the poor out of the city center to the outskirts and separating them from the rest of the city by ring roads.

"Glasgow was the first city to be regenerated by the arts. The major part of it was thrown up during the Industrial Revolution, and no one thought to tear down the medieval parts of the city, which is wonderful for us now and for our history."

It was at this particular moment that Barbara Peters apologized for breaking in and walked up front holding two books-- two of the excellent historical mysteries written by Pat McIntosh that take place in medieval Glasgow.  Since I'd been sitting there thinking about McIntosh, it seems Barbara and I were on the same wavelength.

Milliken steered the interview back toward film.  Mina is very pleased with the film adaptation of "Field of Blood" and considers actress Jayd Johnson as Paddy to be perfect. The first two books of the Paddy Meehan trilogy have been televised now-- Field of Blood and The Dead Hour-- and they're now beginning work on the third.

Denise said, "When a television series or a film is made, it's good for your books. It's flattering, but a book's a book and a film's a film. There's something so very intimate about reading a book."

In the next moment, Patrick Milliken-- as well as the rest of us-- found out that Denise Mina has her feet firmly planted on the ground, as she told us about Charles R. Jackson and his novel, The Lost Weekend. It was an acclaimed book, but once it was made into a movie, no one would buy Jackson's books, and he wound up being forced to stop writing to get a job that would pay. For Mina, writing is the thing, not films.

Denise intends to write two more Paddy Meehan books, simply because of the recent uproar when newspaper staff members were found to be hacking into people's cell phones to find dirt for their stories. "Things like this have been happening for years and years," Mina told us, "they'd just never been held accountable before!"

When Patrick asked her, "Do you consider your books to be political?" Mina responded, "All books are political."

She went on to tell us, "As a wee child, I rewrote the first page of Gone With the Wind, but I changed all the names. I come from a big, big family of storytellers. Being a good storyteller in Glasgow is a big social status thing." (Later on I discovered that Denis and I both thought of another Glaswegian storyteller, Billy Connolly, at this moment.)

By this time, Denise Mina had us all in the palm of her hand. "I think crime fiction comes from an oral storytelling tradition... campfire stories... knowing just when to end a chapter.

"Crime fiction is so accessible. I want people to read my books as though each one is a warm hand to the elbow. I had a fan tell me, 'My mother was dying, and I read all your books as I was nursing her.' That is absolutely the highest praise I could ever receive. I don't want people to read me just to say that I've been read."

Patrick and Denise then began to talk about the shift that has occurred with comic books (AKA graphic novels) within the past four years. Graphic novels were once thought to be very low art, but now many consider them high art. It's the type of shift that's been occurring for centuries. In diarist Samuel Pepys' day, the theatre was considered low art, and he would vow again and again to stop going. "Now we force young children to go to the theatre because it's high art," Mina observed.

The estate of Stieg Larsson approached Mina to rewrite his books as a series of graphic novels, and that's what she's been doing lately. When she began working on The Girl With the Dragon Tattoo, Denise found out that "the structure of the books is bonkers!" And in case you're wondering, Denise is writing the script not doing the artwork. The creation of each book is a partnership between writer and artist.

When asked what effect these comics have had on her writing, Mina replied, "Comics have really affected my writing because I've realized how much can be left out, and how much I can trust my readers. The more readers fill in, the more invested they are in the story."

Another fan asked her how much writing was involved with these graphic novels. "Each one is about 80,000 words, which is the size of a novel," Mina said.

In the final wrap-up, Denise told us that she's almost finished with the next Alex Morrow book, which is set in Helensburgh, Scotland, and based on another actual case. She also needs to finish the Millennium trilogy... and then she intends to take a year off!

Denis and I both got the chance to speak to Denise Mina afterwards, and the Jeep was filled with talk about books, Scotland, and one very talented Glaswegian writer. I can still hear her voice in my head. It was an evening of Bliss. On all counts.