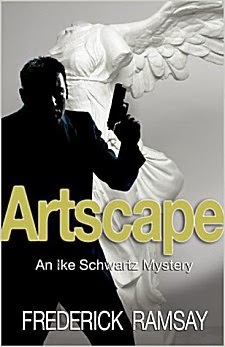 First Line: The sun, still low in the east, heated the morning air and sent it shimmering off the asphalt.

When his wife of one month was killed in a misguided CIA operation, Ike Schwartz came home to Picketsville, Virginia, and became its sheriff. Picketsville's only claim to fame is Callend College, a private women's school which houses one half of the billion dollar Dillon art collection. Although Dr. Ruth Harris, newly hired president of the college, fights passionately against it, the collection is scheduled to be moved from its secure underground bunker at Callend to its new home in New York.

This is bad news for the college, and bad news for the New Jihad, which plans to steal the collection and hold it for a huge ransom. The men the New Jihad has hired to steal the collection have to move up their time table. When things begin to go wrong, law enforcement waves Ike Schwartz off as just another hayseed sheriff who couldn't pour water out of a boot with the directions written on the heel. Boy, do they have some surprises in store for them! Schwartz is a man with a tough hide and an unusual skill set.

After reading the synopses to Frederick Ramsay's books, I downloaded two titles to my Kindle because they certainly sounded like the sort of books I enjoy reading. Unfortunately both titles languished there until I happened to attend an author event for his latest book featuring Ike Schwartz (Drowning Barbie). After being completely charmed by his knowledge and wit, I came home and dialed up Artscape.

The mystery is a good one, and I relished the details of how the group of thieves planned to circumvent all the college security measures and steal the collection. Ramsay's writing style made for vivid mental visuals as the chapters flew by. More importantly, the characters-- in particular Sheriff Ike Schwartz, college president Dr. Ruth Harris, and a young female college student-- came to life. Plenty of sparks fly in the early scenes between Schwartz and Harris, and I liked how Schwartz dealt with Harris' razor-sharp tongue and preconceptions. Both characters are complex, and I am really looking forward to future meetings between the two.

This is one series that I really want to follow, and I would recommend that you do, too, if you like well-written, fast-paced mysteries with excellent characterization.