Where Monsters Dwell by Jørgen Brekke 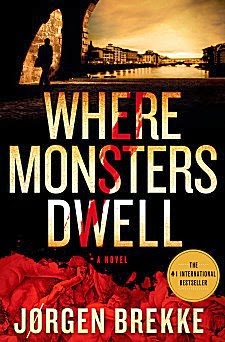 First Line: There are no monsters under the bed.

Police inspector Odd Singsaker has just returned to duty after brain surgery to remove a tumor. He's hoping that the criminals will be quiet in Trondheim, Norway, for his first week back, but the macabre death of a library archivist throws him right into the thick of things. The archivist's body has been found in a locked vault used to store rare, fragile books and manuscripts. What Singsaker needs is a strong lead; what he doesn't know is that the lead will come from Richmond, Virginia. The curator of the Edgar Allan Poe Museum has been found killed in a very similar way to the archivist in Trondheim. When Richmond homicide detective Felicia Stone begins working with Singsaker, they slowly begin unraveling a chilling puzzle that seems to lead to a sixteenth-century book bound in human skin that appears to be the journal of a serial murderer who lived in Norway in 1529.

After reading Where Monsters Dwell, I learned that it was a bestseller in Norway, and I can see why. From the chilling opening scene to the very end, this book has something for everyone: a fast pace, a strong sense of place, a dash of history, a truly puzzling investigation, and three very memorable characters.

One of the characters calls the investigation a "cabinet of curiosities," and it is. There's no apparent reason for either of the murders; strange little facts about book binding, book preservation, and rare books keep cropping up but seem to have no place in the search for the killers; there are plenty of people to interview... but which of them could be suspects? What ties this book together are the two police officers: Odd Singsaker and Felicia Stone. Their backgrounds, their work ethics, their personalities are strong and nuanced, and I was thrilled to see that we'll (hopefully) be able to read further books in the series. Another character I also enjoyed was Siri Holm, a new employee at the library in Trondheim. Siri, with her collection of crime fiction and cataloging of solutions, was a bit of a free spirit. She had her own agenda, but she also added a bit of needed humor to the story.

Another thing that I wanted to mention is more personal preference than anything else. In so many of the other Scandinavian crime novels I've read, it seems as though every time the detective leaves a building, his exact route-- each street and highway from Point A to Point B-- must be listed. I think of it as the GPS Factor. That's all well and good for residents and speakers of the language, but for those of us who are reading in translated editions, such detail is mostly wasted and only serves to make us stumble and stagger as we attempt to pronounce all those names. It was such a pleasure to read this book and discover that Brekke only gives general directions when his characters are out and about.

For me Where Monsters Dwell was slightly marred by a rather Hollywood ending, and I did wish that more of the sixteenth-century serial murderer's story had been used, but it's still a top-notch read. I most definitely am looking forward to more!