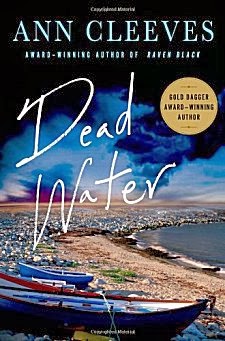 First Line: Jimmy Perez stopped for breath and looked out to sea.

Inspector Jimmy Perez has been on leave from the Shetland Island police force for reasons known to those who have been following Ann Cleeves' books closely. He is trying to work his way back gradually, but his depression and fits of temper are wearing out his co-workers. Whether he likes it or not, he finds himself pulled back into the heart of an investigation into the murder of a journalist. Not only does he have to re-accustom himself to the rigors of an investigation, he has to acquaint himself with a new boss. Detective Inspector Willow Reeves has been sent to head her first big case, and she's determined to find the killer.

When I first learned that Ann Cleeves' books featuring Jimmy Perez were expanding beyond the original quartet size, I was a bit worried. I should not have been. Cleeves has delivered another tightly woven mystery within its beautifully evocative setting of the Shetland Islands.

The mystery centers on a journalist in search of a story-- a journalist whose checkered past on the islands adds to the list of possible suspects. The story he's researching seems to do with alternative forms of energy, and Cleeves does an excellent job of weaving this into the story, along with the energy sources' possible effects upon the islands and their inhabitants.

As usual, it's the characters that bring everything to life, and two of them in particular. Perez's portrayal as a man frozen in grief rings painfully true, and readers who have followed these books from the very first (Raven Black) will hurt along with him and long to see him on the road to recovery. The second character to share the spotlight in this marvelous book is Detective Inspector Willow Reeves. She's smart, she's quirky, and she's brought in especially since she was born and raised on the Outer Hebrides-- a bit of a joke, proving that those in charge in places like Aberdeen or Edinburgh don't know as much as they think they do. One group of islands off the coast of Scotland is not exactly like any other. I liked watching how Willow fit herself in with a new group of people, and if this series continues, I am certainly looking forward to seeing more of her.

Dead Water continues one of the aspects of this series that I love the most. In this day and age of technology, forensics, Google, and everything else, it's the people who solve the crimes. Police officers like Perez and Reeves solve the case because they get out and do the work; they check records, they talk to everyone who needs to be talked to, and they listen. Forensics is all well and good, but to investigators like Perez-- and writers like Ann Cleeves-- forensics serve to back up the evidence that people have worked hard to uncover.  I like it like that.