Don't Ever Get Old by Daniel Friedman 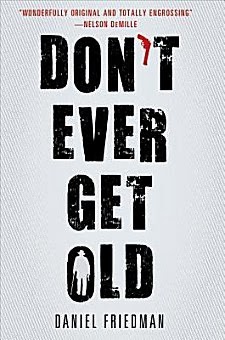 First Line: In retrospect, it would have been better if my wife had let me stay home to see Meet the Press instead of making me schlep across town to watch Jim Wallace die.

When 87-year-old retired Memphis homicide cop Buck (Baruch) Schatz gets word that Jim Wallace is dying, he doesn't much care. He never particularly liked Jim and doesn't understand why Jim needs to talk to him. But at the insistence of his wife, he goes to the hospital where Wallace tells him that the guard who brutalized him in a Nazi death camp is alive and the possessor of a large amount of stolen gold. Buck thinks it's a long shot that the guy is still alive, but with the help of his grandson, he starts trying to track the man down. But word of the gold has gotten out: Buck's being followed everywhere he goes, and people are starting to die. It's a good thing that General Dwight D. Eisenhower himself told Buck to hang on to his gun at all times.

This is one of those rare instances when I read a book and can see how well written it is and how well drawn the characters are... but I can't give it a wholehearted endorsement. 98% of my opinion hinges on how I feel about the main character, old Buck Schatz, and I think that would be true for most readers. Somewhere along the bookish byways I travel through the internet, I saw Don't Ever Get Old referred to as "geriatric noir." It's a fitting description. Buck definitely qualifies as geriatric, and the overall tone of the book is dark.

Set mainly in Memphis, Tennessee, there's very little local color in this book; and as for the plot, I guessed the killer almost right from the start. I could say why because it's a rather witty analogy, but I don't want to spoil the book for anyone who wants to read it.

I had trouble getting into the book because of Buck. He's ill-tempered, rude, crude, and mean-spirited to boot-- and his failing memory and dwindling physical strength aren't making him any sweeter. As a homicide cop, he was known as a "Dirty Harry" type who thought excessive violence and the occasional torture of a suspect were justified if it put a bad guy behind bars. If Buck ever had any real kindness in him, the death of his son must have killed it completely. Throughout the narrative, he tends to be a nasty piece of work.

I came close to not finishing this book, and what saved it for me was when Buck's grandson joins him in his investigation. This "Odd Couple" pairing-- Old vs. New, Instinct vs. Intellect-- did inspire some welcome humor into this rather unpleasant tale. I'm glad that it did because my appreciation of the humor helped me go on to appreciate the writing and the characterizations of Buck and his grandson. If you're in the mood for some grit, some violence, and a cranky old man that you probably won't like, by all means, read about Buck Schatz. He's one of the most unusual characters you'll come in contact with for a long time. But make sure you hang on to your gun!