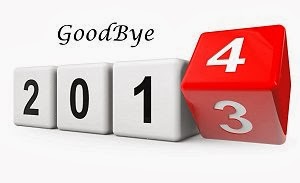 It's a brand-new year, and my spreadsheet now has a page labeled "2014." Most people tend to have these year end posts at the end of the year just passed, probably because they like the feeling of starting off the new year with a clean slate. As you can see, I like to hang on to the old year a few days longer. More than once, I've finished one of my best reads of the year on December 31, so I'm content with letting the days run their course and talking about them just after the new year.

I've been asked if there was going to be a "Best of" list posted on my blog. For the past couple of months, I've had a slideshow on my sidebar that lists all my favorite reads of the year, and if you click on any of the book covers, you'll be taken to my review of that particular book. I read 19 books that I consider to be "the best," and I'm not going to cull the list any further. What did catch my eye as I ran through the titles is the variety of locations:


Yes, I did spend some time in England and the United States, and Canada, Scotland and Norway received more than one mention, but there was no clear-cut favorite setting. I like to hop around a bit as I read, not only by setting but by genre as well! That list has police procedurals, thrillers, cozies, and historical mysteries.

I did say something about "graph-tastic, didn't I? Let's move on to those graphs! 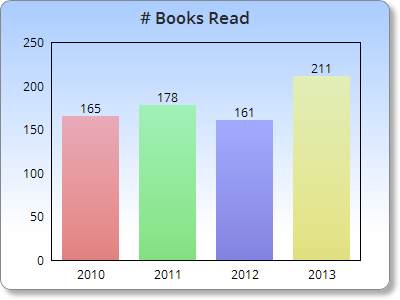 I've told myself for decades that once-- just once-- I wanted to read 200 books in a year, and 2013 was the year that it happened. Although I haven't set the same goal for myself in 2014, you know that it's going to be in the back of my mind that if I did it once.... 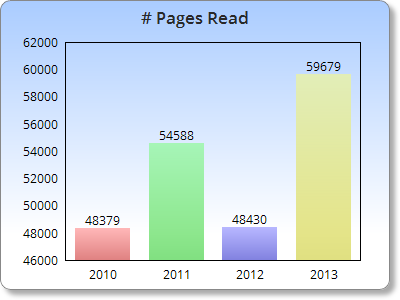 You'd think with 211 books read, my number of pages read would've jumped well past the number for 2011. I think this indicates that I read skinnier books this past year! 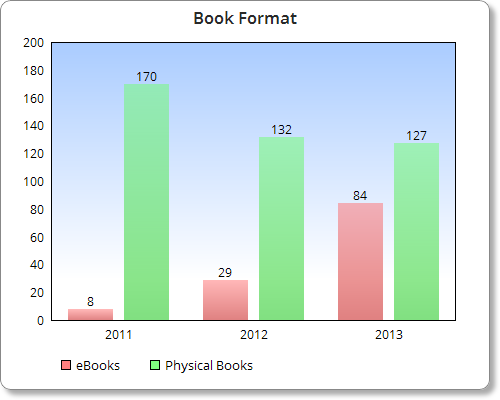 As you can see, my use of eReaders has grown steadily since I first received one as a gift in 2011. ur month-long visit to the UK in 2013 gave the perfect impetus to an increase. There's no way I could've packed enough physical books to last an entire month, so my digital books were a godsend. 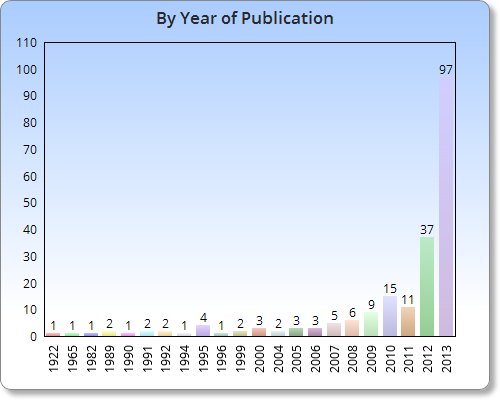 A new category for me to track this past year was publication date. I think it is a very telling one for me as a reader. For the years 1922 to 1999, I read a total of 18 books. The vast majority of my reading is after the year 2000-- almost half the books I read were published in 2013 alone! I would like to dabble more in classic mysteries, but from past experience I know that I will have to pick and choose very carefully. 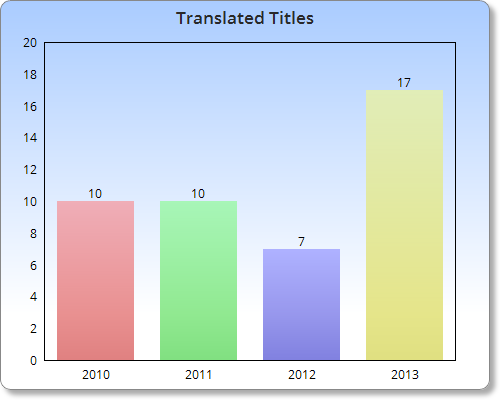 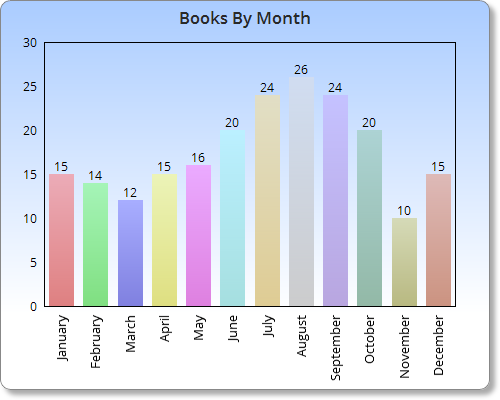 For those of you who have followed my blog for a long time (bless you!) you'll already know that I love to read while sitting in the pool in the shade during the hotter months here in Phoenix. As you can see by the graph, I got a lot of pages turned out there! The months with the dips? In March, I was getting ready for a month-long trip to the UK and then actually in the UK. In November, I was busy with Christmas decorations. 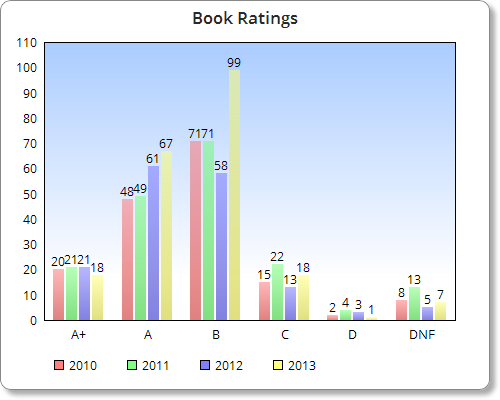 What effect did reading more have on the ratings I gave the books? Fewer A+'s, more A's and B's... but with the exception of those B's that you can see on the graph, there is very little change. I wonder if the lower ratings stem from my forays into new territory versus reading authors who are tried and true, but there are already 14 graphs in this post, and I think there is a very real danger of being too analytical! 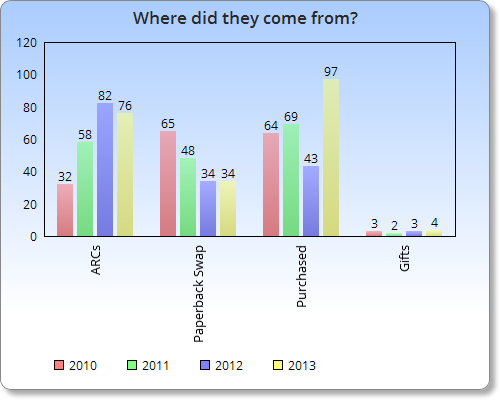 I've also been keeping an eye on the sources of the books I read. Last year I was dismayed at how the number of Advance Reading Copies just kept growing and growing while the books I purchased or swapped were piling up. I am very pleased by how many of my purchases that I read last year, but the ARCs didn't drop far enough to suit me. Another thing that you can see in this graph? I don't receive many books as gifts! 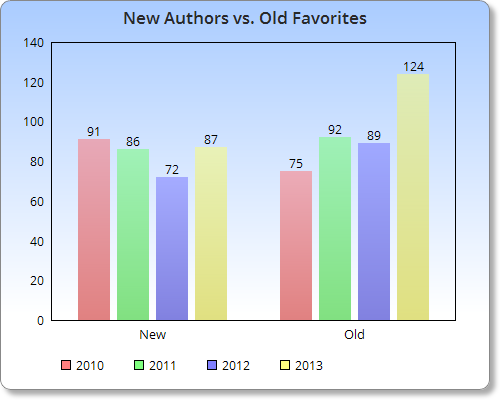 What lures me most: the thoughts of authors I've never read, or returning to those whom have entertained me time and again in years past? Both entice me almost equally, although I did return to old favorites a few more times last year. 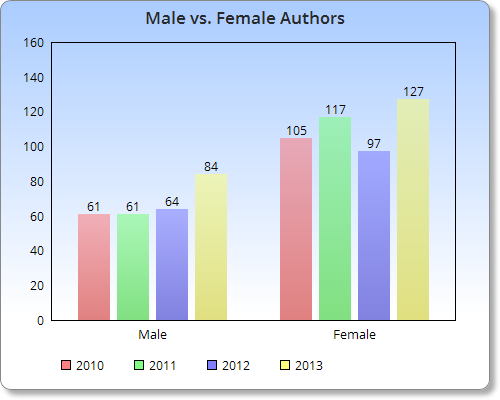 Back in 2011, I didn't like the way I was trending to reading more and more female authors. You wouldn't think it would bother me, since I am most definitely female, but it did. The gap narrowed in 2012, but it widened once more in 2013. I think this category is more difficult for me to control because I choose the books I read by what I'm in the mood for, or-- in the case of ARCs-- by their release dates, not by the author's name. I may just stop tracking this altogether and be quite happy with whatever the results may be. 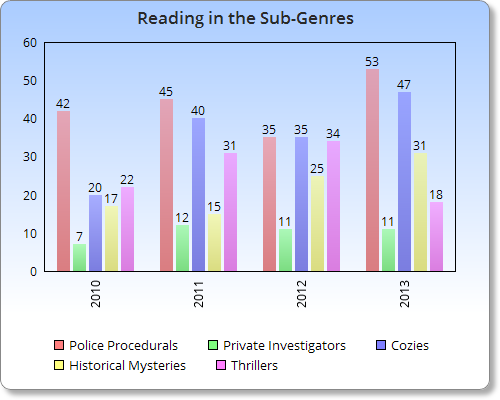 Police Procedurals have always ranked amongst my favorite mysteries, so their numbers remain fairly constant over the years. What I did notice is that the number of cozies I read has risen steadily, while the number of thrillers has dropped. I think the declining numbers for thrillers has a lot to do with the types of advance reading copies I accept now. 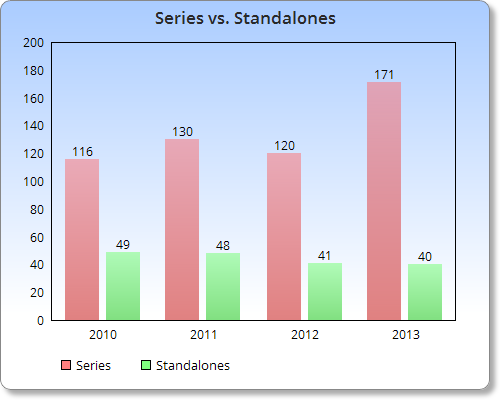 I've long known that I'm a serial reader. Perhaps it's because I was an only child and an only grandchild, but I love gathering my fictional friends around me and keeping up with the events in their lives. This graph shows that my reading of series books has continued to grow, while those poor standalones show a steady but gradual decrease. 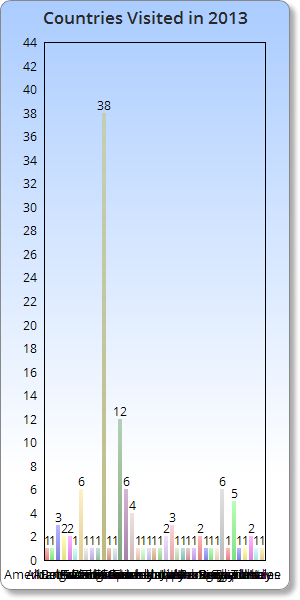 It's fairly easy to see that I'm a bit of a globetrotter when it comes to my reading, but what's even simpler is the fact that I have a few favorite places to visit!

I'm thinking of doing this graph and the next as maps next year. What do you think? 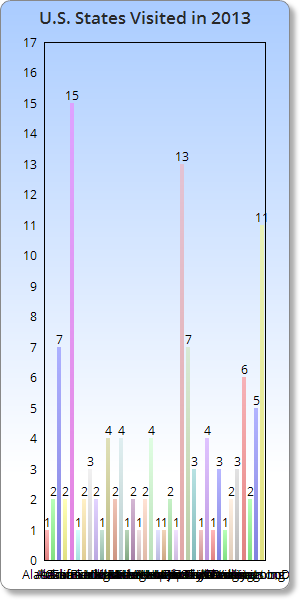 It's easy to see that I have a few favorite stopping-off places in the USA, isn't it? If you're wondering about the "Numerous Locations" category, that designates books that are usually-- but not confined to-- non-fiction, and take place in too many locations to keep track of.

Whew! I think I've gone chart-blind! There is a new category that I'm tracking for 2014, but that will involve a map and not a graph. If you'd like to know where I construct these graphs,  it's a handy website called Chartgo. It's a bookmark that I hope never to lose.

Do you like to track the trends in your own reading-- or do you prefer reading about someone else's? I have to admit that similiar posts from other book bloggers fascinate me even more than compiling my own!

Here's to a safe, happy, and healthy 2014 for all of you-- and don't forget all those good books you're going to be reading!