The Tenth Saint by D.J. Niko 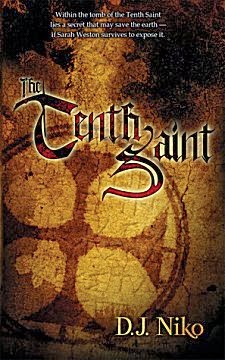 First Line: The camel trod tentatively on a patch of cracked earth.

It's every archaeologist's dream come true: Sarah Weston has found a sealed tomb inscribed in an obscure dialect in the ancient Ethiopian mountain kingdom of Aksum. Her colleagues back in Cambridge, England, are thrilled and saddle her with a very unwelcome teammate, popular cultural anthropologist Daniel Madigan. Their attempts to identify the man in the tomb and to translate those inscriptions lead them straight into danger when ancient prophecies about the Earth's last days eerily point toward technological advances that are just about to be put in place.

The Tenth Saint had several hooks that drew me to reading it: the archaeology, the less well-known setting of Ethiopia, ancient prophecies, and modern technology are just a few. The story, told in alternating chapters and timelines-- from the fourth century story of a tall, mysterious white man traveling with nomads in the desert to the modern-day tale of Sarah and Daniel-- is a little bit Indiana Jones and a little bit Da Vinci Code. However, the familiar plot elements are more than made up for by the book's fast pace, historical details, two very engaging characters, and a nice twist at book's end.

Sarah Weston is the daughter of an English lord and a Hollywood actress, and that combination of parents led to the expected dysfunctional childhood. Sarah is an interesting blend of scholar, adventurer, introvert, and dreamer, and I can see her taking charge of several more books in a series. Her colleague and romantic interest, Daniel Madigan, is the more outgoing of the two, and every bit as intriguing as Sarah. In fact, I wish there had been more scenes with Daniel in the book, so I'm happy to see that they are a team again in the next (The Riddle of Solomon).

If you're in the mood for a story of adventure, history, treasure, and two intrepid heroes written by an author with an eye for setting and character, you might just want to curl up with The Tenth Saint!

Thriller, #1 Sarah Weston
Rating: B
Source: Downloaded as an eBook through Amazon.