A Murder of Crows by P.F. Chisholm 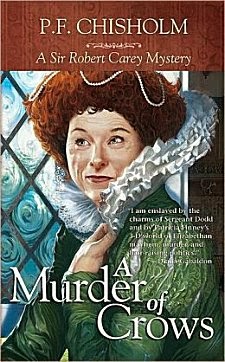 First Line: A hunchback and a poet met in the glorious gardens belonging to the hunchback's father.

It's September 1592, and Deputy Warden Sir Robert Carey and Sergeant Dodd really have to get back to Carlisle where the raiding season is about to begin. Instead they find themselves still in London because Carey's father, Lord  Hunsdon, wants him to solve the mystery of a corpse that has washed up from the Thames onto Her Majesty's privy steps.

Meanwhile, Sergeant Dodd decides to sue the Queen's Vice Chamberlain, Thomas Heneage, for his mistreatment at the powerful man's hands. Unfortunately, none of the lawyers want to go up against such a cruel and vindictive man, but then a young lawyer with a pock-marked face offers to help him. With an unidentified corpse and a rather ill-fated lawsuit, Carey and Dodd have their work cut out for them, and it won't get much better when a would-be poet named William Shakespeare seems to want to help them.

Patricia Finney, writing as P.F. Chisholm, has created one of my favorite historical mystery series, but I thought the Sir Robert Carey books ended with the fourth, A Plague of Angels. I was thrilled when I learned that new books are now appearing under the Poisoned Pen Press imprint.  A Murder of Crows takes up right where the fourth book ended, and I loved being back in the world of Carey and his wonderful Sergeant Dodd. Finney is masterful at adding historical detail without bogging down the narrative, whether it's Shakespeare's envy at another's top-of-the-line paper and pens, or with Dodd's comparison of London street life with his beloved North. Neither has her laugh-out-loud sense of humor disappeared, since Dodd serves as both delineator of sixteenth-century life and comic foil.

As suits any Elizabethan mystery, there are subplots aplenty, but I had no trouble keeping them sorted as I read this fast-paced tale. Sir Robert Carey takes a backseat in this book, but I have to admit that I didn't really miss him. This is due to two facts: Dodd is more than capable of handling the bulk of the action, and Finney adds a very intriguing character in the young lawyer, James Enys, who-- delightfully-- is not exactly what he seems to be. (Finney has since published Do We Not Bleed?, the first of what I hope will be many James Enys mysteries.)

If you're in the mood for a first-rate historical mystery that will sweep you back to Elizabethan England where you will laugh and try to puzzle out what's going on, you can't do much better than reading any of P.F. Chisholm's Sir Robert Carey mysteries. I love them!