Women Who Charmed the West by Anne Seagraves 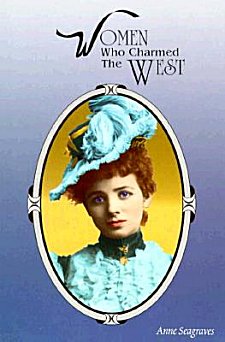 First Line: The first public amusements and early days of the theater have always fascinated the American people.

This slim volume packs a lot of interesting-- and fun-- information about actresses who charmed audiences throughout the western United States from the 1800s and on to the turn of the twentieth century.

Nine legendary actresses from the likes of Lillian Russell, Sarah Bernhardt, Adah Isaacs Menken, and Lillie Langtry grace this entertaining book in photographs and text. For the most part, I already knew much about such performers as Russell, Bernhardt, and Langtry, but I still enjoyed being reminded of their talents and their exploits. Reading about those who are even less well known made me want to begin research on them as soon as I finished the book.

If you like discovering tidbits such as which actress was the world's first superstar... or which actress had the first red carpet rolled out for her, this is definitely the book for you. It may be a light version of women's history, but with the bibliography in the back, it won't be difficult to learn even more about them if you're so inclined. I know I am!