The Wings of the Sphinx by Andrea Camilleri 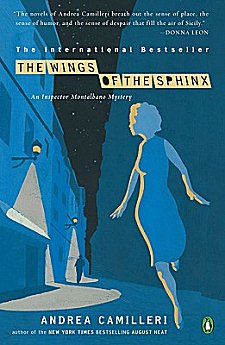 First Line: What ever happened to those early mornings when, upon awakening, for no reason, he would feel a sort of current of pure happiness running through him?

Inspector Salvo Montalbano continues to feel his advancing years in this eleventh outing in Sicily, and it doesn't help that his relationship with Livia is once again at an impasse. When the body of a young woman is found-- with half her face shot off and only a tattoo of a sphinx moth to identify her-- Montalbano realizes that he's even becoming tired of all the violence he encounters while on the job.

The investigation has barely started when the sphinx moth tattoo leads his team to three more unsolved murders. All the women are victims of the sex trade... and they were all rescued by the same prominent Catholic charity. With the Church vehemently protesting the investigation, will  Montalbano and his team be able to put an end to the deaths?

With Montalbano's bitterness about his ever-increasing age, I have to admit that I've found the last two books in this series not as enjoyable as the rest. I'm from the school that believes getting older is better than its many alternatives, and it's best to put up and shut up. Montalbano did not attend the same school. Fortunately, he spends very little time grousing about the inevitable in this installment, so my enjoyment factor shot back up to its usual level.

Another element that can adversely affect my enjoyment is Montalbano's relationship with Livia. Too often, their squabbling has appeared to be squabbling for its own sake, but in The Wings of the Sphinx, their disagreements show that they both realize that they are at a very serious crossroads in their relationship.

One of the things I enjoy most about Camilleri's series is the economy of his writing. He packs food, travel, musings about life, death, aging, the government, as well as humor and an intriguing murder investigation into fewer pages than many writers today. His economy of style doesn't sacrifice plot or character either. And I can't say enough about Stephen Sartarelli's translation. It's clear and engaging yet still gives English readers the flavor of Sicilian speech. He also includes notes in the back that can enlighten us about various items mentioned in the story. (But it's possible to ignore them and not lose anything in the reading.)

The Wings of the Sphinx is another strong book in one of my favorite series. I look forward to more.