The Men Who United the States by Simon Winchester 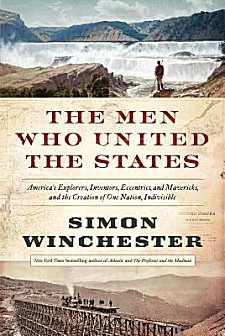 First Line: Thomas Jefferson was a man with a lifelong fascination with trees.

In his latest book, Simon Winchester attempts to show us how the United States became "E pluribus unum"-- out of many, one. He does it-- as usual-- with wit, and heart, and style.

I loved this author's The Professor and the Madman, and I became a true fan with the publication of Krakatoa: The Day the World Exploded. I looked forward to seeing what he could do with a subject this massive.

Winchester chose as his framework the five classical elements: wood, earth, water, fire, and metal. Like all the earliest explorers, Lewis and Clark had to confront endless, ancient forests. Wood was a dominant feature of every expedition across the country. Once the basic geography was established, it was time to learn what riches were concealed in the earth, and with that knowledge, the expansion exploded. With the building of canals and the use of natural waterways to the invention and use of engines that relied on heat-- steam, gasoline, aviation fuel-- the time it took to cross the country became shorter and shorter. Finally, metal was the key to the final stage of uniting this country: copper telegraph cables, steel telephone wires, iron radio and television masts, all the way to the underpinnings of the Internet. With that swift communications capability, this large land mass was truly united. The author's chosen framework does its job well.

This book is not comprehensive, but is a fascinating overview, shining Winchester's spotlight on many little known people responsible for making the United States what it is today. It also is not a hymn to American superiority; when we chose the wrong road, Winchester says so. As the author added brush strokes to his canvas, he made me remember childhood cross-country trips and put the many things I'd seen in a much wider (and eye-opening) perspective.

As much as there is to like in this book-- and there is a lot-- I felt that it wasn't quite up to the standards of his other books (like Professor and Krakatoa). I believe there is one reason for this: the aforementioned books have a much narrower focus that can delve deeply into the facts in such a way that lend themselves to a smoothly flowing and fascinating narrative. The focus of this book is so big that it's a bit unwieldy, and from time to time I found my attention straying. Be that as it may, Winchester reminded me of the many wonderful things that have occurred to transform this country. He's also sparked my interest to research several subjects more deeply, and isn't that one of the best things a book can do-- entice us to learn more?

The Men Who United the States: America's Explorers, Inventors, Eccentrics, and Mavericks, and the Creation of One Nation, Indivisible
by Simon Winchester
ISBN: 9780062079602
Harper © 2013
Hardcover, 512 pages