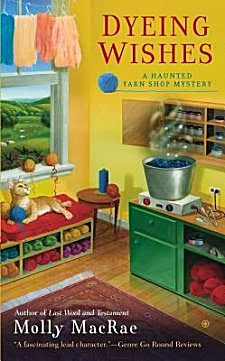 First Line: "Where are the lambs?" Ernestine asked when she and I caught up to the rest of our group at the pasture fence.

Kath Rutledge and other TGIF (Thank Goodness It's Fiber) group members are visiting Cloud Hollow Farm to learn more about the techniques of dyeing. Before the classes start, the women gather by the pasture fence to look at the ewes and lambs, but all they can see are sheep rumps-- the sheep are much more interested in something else. When Kath treks over to investigate, she finds two bodies under a tree, and one of the bodies is someone they all know. With the police convinced that it's a murder-suicide, Kath's friends encourage her to do her own investigating-- even Geneva, Kath's television-addicted ghost who lives in her attic.

Molly MacRae's Haunted Yarn Shop cozy series is one that I've fast learned to enjoy for its cast of characters, its humor, and its primary setting of a yarn shop in which I can browse to my heart's content without obliterating my budget.

Yes, the mystery part is solid, but oh how MacRae's characters shine! She's assembled a cast that should fuel the series for quite a while. In the first book I tended to think Geneva the ghost was a pain in the neck that dragged the book down a bit, but although she's still a pill in Dyeing Wishes, she starts taking an interest in something other than herself and I began to soften towards her. Geneva drives Kath batty with her constant references to television programs, so Kath decides to wean her away from the boob tube-- and her solution will make any reader laugh and want to give Kath a high five.

Another thing I enjoy so much in these books is the wordplay-- for example, when Deputy Cole Dunbar refers to the Friday Fast and Furious knitting group as "the frantic and flabbergasted." MacRae slips these into the story stealthily, so beware: drink at your own peril.

If I have any little quibble at all with this book, I'd like to have seen more fiber in the storyline-- and I'm talking fabric, not food. If you're in the mood for interesting characters and a mystery laced with humor, I recommend heading down to Tennessee to visit with Kath Rutledge at her shop, the Weaver's Cat.