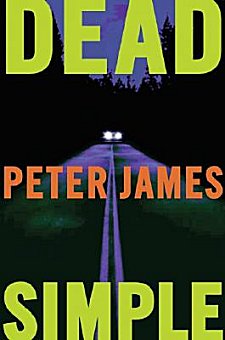 First Line: So far, apart from just a couple of hitches, Plan A was working out fine.

Three days before his wedding, four of Michael Harrison's best friends take him out for a stag night. A few hours later, the four friends are dead and Michael has disappeared. After being contacted by Michael's distraught fiance, it is now Detective Superintendent Roy Grace's job to find the missing man. As he begins his investigation, Grace-- a man haunted by his own missing wife-- begins to think there's more going on than meets the eye. Was this a harmless stag night prank turned tragic? If it is, then why is the one man who knows Michael Harrison better than anyone else keeping quiet? It's up to Roy Grace to find the answers and to find Michael before it's too late.

What a fun book to read! The outcome of the prank itself is bad enough, and most writers would take that one idea, run with it, and have a good book. Peter James does a Churchill with this same idea. One simple prank-- a riddle-- which he then wraps up in a larger mystery and finally tosses into an enigma with even greater implications. The fun for readers is to savor each page, to tease out the clues, to deduce what's going on... and to hope that Detective Superintendent Roy Grace can put it all together in time to save Michael Harrison's life.

Peter James has also created a fascinating main character in Roy Grace. As a young boy "Grace had been addicted to cop shows on television, to books about detectives and cops of every kind-- from Sherlock Holmes to Ed McBain. He had a memory that bordered on photographic, he loved puzzles, and he was physically strong." Now that he's been on the force for a few years, Grace realizes that "in this modern, politically correct world, you could be a law enforcement officer at the peak of your career one moment and a political pawn the next." It's that realization that can make showing up at work in the morning a bit grim.

The juxtaposition of a thriller-type plot and a nuanced character study is what makes Dead Simple so much fun to read. The adrenaline junkie portion of my reader's brain could gorge on all the twists and turns while the more introspective and thoughtful portion of my brain could savor James's characterizations. This book had been sitting on my to-be-read shelf for a long, long time. Now I know why it kept catching my eye each time I walked past. I can't wait to continue with this series!