City of Dragons by Kelli Stanley 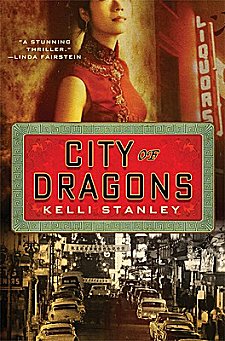 First Line: Miranda didn't hear the sound he made when his face hit the sidewalk.

33-year-old Miranda Corbie is in Chinatown in San Francisco. It's 1940, and Chinese New Year is being celebrated with a Rice Bowl Party to raise money and support for the war relief in China. The last thing this private investigator expects to stumble over in the street is the dead body of Eddie Takahashi.  Miranda wants justice, regardless of the price, but the Chamber of Commerce wants the whole thing swept under the rug, and the police department is more than willing to oblige. From Chinatown to Little Osaka to a high-class bordello, Miranda Corbie is on a mission, and she's determined to succeed.

This historical mystery/classic noir P.I. tale is a prime example of one of the hardest books for me to review: a book whose technical brilliance is obvious, but it contains things that I just don't like. The only thing I can do is talk about the good stuff, itemize what I didn't care for, and let you make the ultimate decision on whether or not you want to read the book-- which is something you do anyway.

Under author Kelli Stanley's pen, the San Francisco of the 1940s -- in particular the Chinatown and Little Osaka neighborhoods-- comes to life and should be considered one of the primary characters. It is a wonderful evocation of a time and a place that I greatly enjoyed.

While reading City of Dragons, you will also feel as though you've stepped right into the pages of a classic noir private investigator tale. In my "mind's ear," I heard Stanley's characters speak in voices that were eerily akin to those of Humphrey Bogart, George Raft, Sidney Greenstreet, and Peter Lorre. This book is dark and twisted, make no mistake, and deducing the whys and wherefores led me on quite the chase. For anyone who loves this sort of book, I highly recommend it.

With all that's oh-so-right about the book, there were a few things that became very wearing to me as I read. True to the period, everyone and their brother smokes-- and to such an excess that cigarette smoke should rise from the pages each time the book is opened. I'm not the type of person who's vehemently anti-smoking, and characters who smoke-- as a rule-- don't bother me, but this book was an exception.

In order to get to know the main character, Miranda Corbie, you'll be forced to wave endless nicotine clouds from your face and prepare yourself to endure  quite a bit of negativity and bitterness. True to the noir heart, Miranda is a tragically wounded hero. Her disillusionment escalated when she participated in the Spanish Civil War and continued when she returned to America and worked as an escort. Her first taste of life as a private investigator was working with someone who handled divorce cases-- and that's just the tip of Miranda's iceberg. Miranda has seen too much of the dark side, and it has deeply affected not only her outlook on life, but other aspects such as her speech. As someone tells her, "Watch your mouth. You talk like a sailor, not a professor's daughter." Having grown up among sailors and farmers, I'm accustomed to profanity and scatological references, but too much from anyone and I begin tuning them out. Not a good thing for conversation or for novel reading.

As I read City of Dragons, I found myself enjoying its depiction of San Francisco and its evocation of the 1940s and classic noir. But the more I read, the less I liked Miranda until she became a true liability. It's a shame, but I doubt that I'll continue with the series, and I'll admit that my decision is purely due to personal taste. However, if secondhand smoke and an embittered, much too serious main character don't bother you, you should be in for a real treat.