A Letter of Mary by Laurie R. King 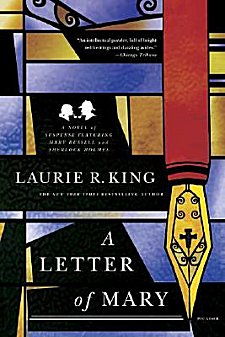 First Line: The envelope slapped down onto the desk ten inches from my much-abused eyes, instantly obscuring the black lines of Hebrew letters that had begun to quiver an hour before.

It's the summer of 1923 when a friend of Mary Russell's comes to Sussex to visit her and her husband, Sherlock Holmes. Miss Dorothy Ruskin is an archaeologist and has spent years working in Palestine. Before she leaves, she entrusts an ancient manuscript to Mary's care. Once translated, it seems to hint that Mary Magdalene was an apostle. Mary knows what kind of religious furor knowledge of this letter could create, but she can't help being intrigued by the possibilities. However, before Mary can decide what to do, Ruskin is killed in a tragic accident on a London street-- and Mary and her husband find themselves hunting a killer.

For some reason, I thought the book that revealed Mary Russell and Sherlock Holmes to be married would have a bit more fanfare surrounding the event, but it is stated as a matter of fact. (Those of you who think I just fell headlong into the spoiler pit, think again. The marriage is mentioned in the very first line of the synopsis.) Although there is no celebration, readers do see the two trying to become accustomed to being a pair, such as when Holmes says

"I am not criticising, Russell. There is nothing wrong with the way you gather information-- far from it, in fact. It is only that I still find it difficult to accustom myself to being half of a creature with two brains and four eyes. A superior creature to a single detective, no doubt, but it takes some getting used to."


A Letter of Mary is filled with witty repartee, and an entire section is given over to Mary's undercover work as a private secretary to two possible suspects: a wealthy man and his lecherous son. (The scene in which Mary takes care of the son is well worth the price of admission.) In addition to the two suspects, readers see this formidable pair of detectives working with the son of Inspector Lestrade, Mycroft Holmes, and one of the Baker Street Irregulars, among others, making this third book in the series have the best cast of secondary characters so far.

With a manuscript of such incendiary potential, I was hoping for some fireworks by book's end, but they didn't really materialize. What does materialize is the continuing "humanization" of Sherlock Holmes. Laurie R. King does a superb job of "appropriating" the world's greatest detective that we all know and love and showing that he is capable, not only of great love and affection, but of a relationship with a very strong and intelligent woman who is every bit his match. Conan Doyle allowed us a glimpse of Holmes' heart in his stories, and in King's series, we see it beating strongly. Is it any wonder that I'm hooked?