The Skull Mantra by Eliot Pattison 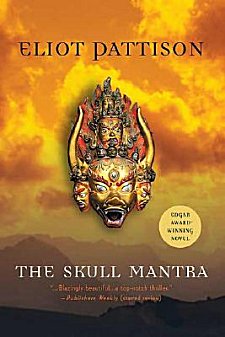 A prison work detail in Tibet find a headless corpse dressed in American clothes high on a windy cliff in the Himalayas. The remains are obviously of someone too important to bury and forget, but Chinese authorities want no part of investigating the crime. They have to find the perfect someone to shoulder all the responsibility-- and all the blame. Their choice is Shan Tao Yun, a veteran police inspector, and he's perfect for this job no one wants because he is a prisoner who's been deported to Tibet for offending an official in Beijing. Granted a temporary release, it doesn't take long for the methodical, wily Shan to be pulled into the Tibetan people's fight for their sacred mountains and the Chinese regime's bloody tactics. When a Buddhist priest-- a man Shan knows is innocent-- is arrested and charged with the crime, Shan knows he must work even faster to unmask the real killer.

I slid into this book effortlessly and was spellbound throughout. This book is as much about the land and the people of Tibet as it is a skillfully plotted and gracefully written mystery. In the depths of a desert summer, Pattison had me shivering with cold in a prison camp high in the Himalayas. I suffered with the prisoners, and I watched, amazed, as Shan Tao Yun deftly wove his way through a labyrinth of Tibetan customs and the cruel and callous bureaucracy of the Chinese. I am always somewhat impressed and aghast at the subtleties involved in such a completely different mindset. Shan always seemed to know when to push an advantage and when to retreat; how to look for the open window when a door is slammed shut in his face. You would think that such a man, unjustly accused and doing whatever he can to survive in hellish conditions, would become bitter and hard. Shan has not. Living as he has with the priests and other Tibetan prisoners, he seems to have absorbed their quiet calm and infinite kindness. When you combine this behavior with his sharp policeman's mind, you create an incredibly powerful and memorable character.

As I was learning about Chinese prison conditions and the contempt and cruelty the Chinese have shown the Tibetan people over the years, I was also falling in love with the landscape. How could I not with passages such as this:

The seeds of the night sky grew in Tibet. There the stars were the thickest, the dark blackest, the heavens closest. People looked up and cried without knowing why. Prisoners sometimes stole from their huts... to lie on the ground silently watching the heavens. The year before... an old priest had been found in such a position one morning, frozen, his dead eyes fixed on the sky. He had written two words in the snow at his side. Catch me.


As is so often the case when reading a book that deals with a mindset so entirely alien to mine, I didn't even try to deduce what had happened or who had killed the American. I was pulled along in the strong current of Eliot Pattison's lyrical narrative, hoping that it would never end. This is one of the best books I've read this year, and I look forward to continuing the series.