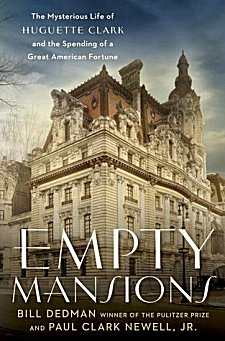 Singman was on his way to the opulent apartment of Huguette Clark, an 85-year-old heiress living in seclusion whose untreated ailments meant that she had to be admitted to the hospital. She would regain her health, but she spent the rest of her life (twenty years) living in a hospital room. Her beautifully appointed mansions in California, Connecticut, and New York City would continue to wait for an owner who would never visit.

To understand Huguette Clark, one must learn about her parents. Her father, William A. Clark was one of the wealthiest men in America, making his fortune in copper. The one thing he wanted was a title, and he tried every trick in the book to become the senator from Montana. After his experiences he retired from the political arena to build the largest, most impressive mansion on Fifth Avenue. This is where he would bring his second wife (39 years his junior) and his two daughters to live.

The second Mrs. Clark shunned the limelight, and her youngest daughter seems to have inherited that trait and turned it into an art form. After a disastrous marriage that didn't survive the honeymoon, Huguette lived with her mother, the two women dividing their time between their Santa Barbara, California mansion, and their spacious apartments in New York City. After her mother's death, Huguette chose to live alone with her priceless paintings and her exquisite collections of Japanese art. As her servants died one by one, she found herself alone, communicating by letter or telephone. Once in the hospital, she felt safe and cared for, and the hospital administrators decided not to make her leave.

Granted, the part of the book about William A. Clark is the most interesting in the book. The man lived a long life, and he lived large-- so large that several books could easily be written about him. However, this book does belong to Huguette. It's difficult to make someone fascinating who would only communicate by letter or telephone. It's hard to bring a woman to life who hadn't had her photograph taken in decades. It's even more demanding to create a portrait of a woman who loved to paint, to watch The Flintstones and The Smurfs, and to create elaborately detailed dollhouses, without having readers dismiss her as childish or senile. The authors do manage to accomplish this very subtly.

During her later years, Huguette loved to write checks to those she cared for and who cared for her. The nurses who worked with her soon learned to pepper their daily conversations with off-hand mentions of old, worn-out cars, wished-for college educations, or tiny, cramped apartments. Even Huguette's doctors made frequent appearances with their requests, and the administrators had their own pecuniary reasons for allowing her to live in their hospital. After her death at the age of 104, Huguette's relatives, who'd thought nothing of leaving her alone for decades without even cards or telephone calls, began circling to contest her will. $300 million will do that to most people.

It's easy to read this book and dismiss Huguette Clark as a little rich girl who never had to grow up, as an old lady who was taken advantage of by everyone she came in contact with. But that's not what I came away with when I'd finished Empty Mansions. I was left with a mind buzzing with details about priceless art and the most opulent era in America, and that's not all. Not by a long shot. I was also left believing that here was one woman who was given the opportunity to do what made her happy, and she took it. She did as she pleased, she hurt no one, and she helped many people. Was she taken advantage of? Yes, I believe she was. But I also believe that she took more than a few advantages of her own.

The authors set out to present a fair and balanced portrait of a mystifying woman. They did, and in such a discerning manner that I didn't feel coerced into their way of thinking. Empty Mansions is a fascinating portrait of a bygone era and an enigmatic woman.