Born in the Year of Courage by Emily Crofford 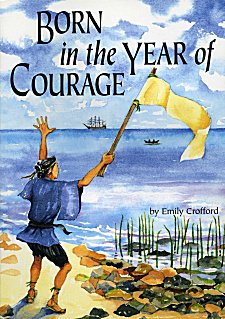 First Line: Manjiro lay wondering why he had awakened with a sense of foreboding.

Based on the life of a real person, Born in the Year of Courage is the story of a poor, fifteen-year-old fisherman named Manjiro who, in 1841, was marooned on an island with his crewmates and later rescued by an American whaling ship. Since the American ship was not allowed to enter Japanese territorial waters, Manjiro and the others knew the only thing they could do was stay aboard the whaler.

When the whaler leaves Hawaii, the other fishermen choose to stay in that tropical paradise, but Manjiro follows Captain Whitfield. Manjiro is raised by the Whitfields as a son. He learns English, attends school, and signs on as second mate and navigator on board another American ship. Extremely hard-working and loyal, Manjiro remains true to both his Japanese and his American families, and as an adult works tirelessly to open Japan to contact with the rest of the world.

This book, geared towards pre-teens, is just as interesting to read for adults. Crofford shares much information into the lives of the Japanese in the first half of the nineteenth century as well as what life aboard a whaling ship was like. The chapters concerning the shipwreck and being marooned on a rather barren island are gripping.

Manjiro, a simple man whose culture didn't allow him to have a surname, is a truly inspiring person who believed that oceans link countries, not separate them, and he spent his life working for what he believed in. I am a long way from being a pre-teen, but I was very impressed with the power and insight of this book.