The Poacher's Son by Paul Doiron 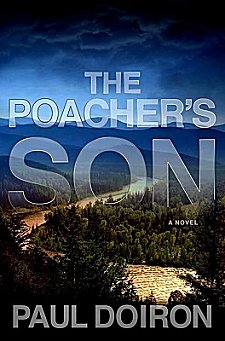 First Line: When I was nine years old, my father took me deep into the Maine woods to see an old prisoner of war camp.

Mike Bowditch's relationship with his hard-drinking, anti-establishment, animal poaching, womanizing father has always been a troubled one, especially once his mother decided to leave and take Mike with her. Now Mike's back as a game warden in the Maine woods that he loves. This decision has already cost him his marriage, and now it's about to cost him a whole lot more.

Jack Bowditch has been accused of murdering two men-- one of them a police officer-- and he's on the run in an area he knows better than anyone else. Mike knows that his father simply could not do what he's been accused of, so he puts his job and his life on the line to find his father and to prove his innocence.

Oh my. The further this story unfolds, the more flawed and quirky Mike Bowditch's character becomes. In many ways Mike puts me in mind of another game warden: Joe Pickett out Wyoming way in C.J. Box's series. There's one major difference between Mike and Joe, however. Mike's conflicted relationship with his parents has made him a bit passive aggressive. He's as stubborn as they come, but shows very little initiative in actually getting out there and finding clues. His investigation has no strategy and a wherever-the-wind-blows-me mentality. By book's end, I think a lot of that has been knocked out of him.

And not just by the action. As much as I liked Mike Bowditch, it was the character of former warden Charley Stevens that really caught my eye. Charley's a bit of a legend in those parts. There's little he hasn't seen or done, and he knows when to be a bull in a china shop and when to use the charm of a snake oil salesman. He sees something in Mike and goes out of his way to help the young man. I'm looking forward to seeing how the relationship between these two men develops in future books.

The third character in this book that caught my imagination was the Maine wilderness. It's a part of the world to which I've never been, but Doiron's descriptions of it remind me of many of my favorite wild places here in Arizona. Doiron has a lot to say about the wilderness and what's being done to it, and it defines Mike Bowditch's character in a way nothing else in the book can. I can only nod in heartfelt agreement when Mike says, "Nature will forgive humankind just about anything, and what it won't forgive I hope never to witness."