The Girl of the Sea of Cortez by Peter Benchley 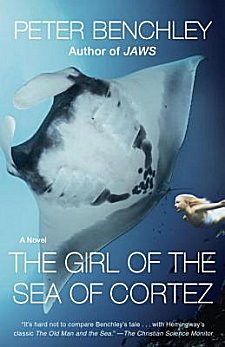 First Line: The girl lay on the surface of the sea, looking into the water through a mask, and was afraid.

Peter Benchley is best known for his book Jaws and the subsequent Steven Spielberg movie, but it is The Girl of the Sea of Cortez (published in 1982) that is his most heartfelt book about man's relationship with the sea.

Paloma is a young woman who lives with her mother and brother on an island in the Gulf of California. Her father had a deep and abiding love of, and respect for, the sea. After trying and failing to share his passion with his son, he learns that it is his daughter, Paloma, who will be the one to understand the lessons he teaches. Not only does Paloma take all his lessons to heart, she also seems to have an innate sense that the sea and all its creatures need her protection.

Each day Paloma paddles her tiny pirogue out to a secret destination where she anchors above a seamount-- a submerged volcanic peak-- that is home to a spectacular abundance of marine life-- and it is there that she forms an incredible bond with a manta ray so large that it blocks the sun. Paloma is willing to fight to protect this creature and this bond, for there is something every bit as certain as the sun rising and setting and the ebb and flow of the tides: man's greed. Paloma will have to fight with every ounce of courage and knowledge she has to protect her beloved seamount and the thousands of animals that call it home.

My mother read this book when it was first published in 1982. Almost as if it were yesterday, I can hear her telling me that she thought of me as she read about Paloma. My mother could see me exploring the seamount and swimming with manta rays. For some reason, I never picked up the book to read it. I don't know why. Just as I don't know why I felt compelled to read it now, thirty-one years later.

My salt water swimming pool was the perfect place to read this book. As the pages turned, I found myself nodding my head in agreement with Paloma's father and the lessons he taught her. Jobim taught her many practical things about swimming, diving, the weather, the sea, the marine life, and how to respect them all. He didn't have to teach her to love it; that came naturally. Jobim believed, as I do, that "Nature is one miracle after another. Man can't improve it; he can only change it."

The Girl of the Sea of Cortez is a beautiful fable, and as I read it, I turned into Princess Paloma. I seldom ever find myself so completely identifying with a character, and when it does happen, it's very special. Paloma's skill was my skill; her wonderment at the beauty of the sea and its creatures was mine; her determination to protect the seamount was mine. This entire book is a song, a poem, and Benchley's love of the sea is evident on each and every page.

This isn't a review as much as it is a sharing my personal reaction to this book, and one thing that occurred to me after I'd finished reading it and was still basking in the afterglow was the similarities my favorite movie ("Avatar") shares with this book. I can understand why The Girl of the Sea of Cortez is a cult classic, and methinks it is a favorite of director James Cameron, too.

Mom, it took me thirty-one years to understand fully why you thought of me when you read this book. Thank you for the compliment.