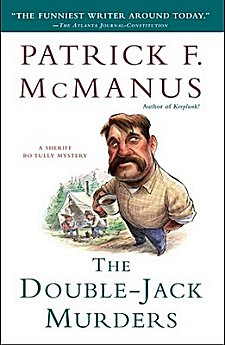 Just because he's had a death threat is no reason to call off the Fourth Annual Sheriff Bo Tully Empty the Freezer Day that always takes place on his property. All the other local politicians have been beside themselves for four years now over missing out on a free vote-gathering extravaganza that doesn't cost Bo a dime. (Although he does draw the line at eating any mystery meats the voters bring in.)

But the death threat is a serious one, and Bo decides to head for tall timber in an attempt to get the would-be assassin away from his constituents and into a trap of the wily sheriff's choosing. When Agatha and Bernice, two old ladies at the remote Quail Creek Ranch, ask Bo to take on a 75-year-old cold case, he knows this fits the bill.

Whenever I'm in the mood for good characters, good stories, and good laughs, I head on over to Blight County, Idaho, and cozy up to Sheriff Bo Tully. Bo Tully, the sheriff who makes pets of spiders that take up housekeeping in his office window. Bo Tully, the sheriff who now shares accommodations with Clarence, the dog with a criminal past. (Clarence was arrested several times for hiding under cars and biting people on the ankles.)

If you're a Craig Johnson fan who's reading this review and starting to have stars in your eyes, I'd advise you to proceed with caution. Yes, McManus's books do have a lot in common with Johnson's Walt Longmire series, but McManus's series is much lighter and played more for the laughs. The two series compliment each other nicely, but come election time, I'm voting for Longmire, if you see what I'm saying.

The story line for this third book in the series is right out of the pages of the Old West. Back in 1927, a gold miner tells his family that he and his young partner have hit the mother lode. The two men return to the location of the mine, but they never come home again. It's up to Bo to piece together clues in this cold case and dodge bullets from an escaped prisoner. Bo knows the territory, and he knows the people. He's got a distinct advantage-- although it's certainly rugged terrain in which to locate a hidden mine.

Watching Bo solve a mystery is one very fun way to spend an afternoon, and I would recommend this series to anyone who likes humorous mysteries set in the West.