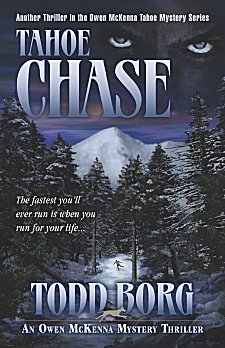 First Line: It was the softness of the metallic click that sounded dangerous.

When a 92-year-old former Olympic ski racer hires Owen McKenna to investigate his wife's fall from the deck of their Lake Tahoe home, it's slow going until the woman's friends also begin to die from bizarre "accidents." It seems they all opposed a new ski resort development.

While McKenna is digging into this new angle, he meets yet another friend of the hospitalized woman. Simone is a young French woman who is in very real danger from her abusive boyfriend. Since she has nothing to do with the ski resort, McKenna encourages her to take part in a solo endurance ski trek through Desolation Wilderness.

After Simone is on her own, miles from anyone, McKenna realizes that he's made a deadly mistake. The young woman is the next to die, and the one closest to her is the one who intends to kill her.

Once again Todd Borg has wrapped me around his little finger. From the brief beginning scene with Cynthia and Molly the mountain chickadee, I began falling in love with his characters. Next in line for my adoration was the aloof Joe Rorvik, 92 years old, a former Olympic champion ski racer, and shattered by his wife's hospitalization. One by one, Borg deftly fits all these well-drawn characters into his puzzle of a story. He's written a fine example of misdirection, and by the time you realize you've been suckered, your car's already begun to lose control on that hairpin mountain curve.

I know these Owen McKenna books are usually referred to as thrillers; they're even published by Thriller Press. Yes, they normally do have a fast pace and lots of action, but they are so much more than your standard thriller fare. What raises them high above that standard thriller fare is three fold: (1) Borg's characters, (2) Borg's setting of the luscious Lake Tahoe area, and (3) those added extras.

I've already gone into how much I love his characters. Cynthia only has one very short scene, but it's enough to make you mourn what happens to her. Joe is gruff and prickly, but his love for his wife gets readers past the prickles, and I can guarantee that the old man will have you cheering out loud before the end of the book. Simone is a long-time victim of abuse, and she's so real that you don't know whether you want to hug her or shake some sense into her-- but she'll surprise you more than once before you can make up your mind. I've only mentioned three of the characters in Tahoe Chase, but they aren't alone. Good guy or bad guy, you can visualize them all, hear them in your head, and react to them.

Of course Owen McKenna (and Spot) are the very best characters of them all. Spot is the best four-legged sidekick in crime fiction, and he does it without going all ninja psychic or talking in italics. He's a dog, and as far as I'm concerned he can sprawl across my lap any time. (I may need help to move afterwards though.) As for Owen... if I weren't happily married, I'd be headed up to Lake Tahoe to find him. As an ex-cop, he has an excellent working relationship with local law enforcement-- and the way he treats each person he's with as well as the way he listens to them... okay... I'm feeling all knotted up here. I think I wrapped myself around someone's finger again.

The added extras are numerous. The Lake Tahoe setting, complete with dazzling word pictures and a bit of history. You learn a bit about how new ski resorts are created and built, as well as a bit about skiing. Want to find out where you are by reading a compass and topographical maps? You'll learn a bit about that, too. Every added extra is there for a reason. Each builds suspense. Each gives you a tool so that you can deduce what's going to happen. The pace in this book doesn't grab you by the throat in chapter one and throw your exhausted body out the door at book's end. No, the pace builds gradually-- perhaps in deference to the 92-year-old man who is at the book's heart. The book moves steadily and surely to one dynamic chase scene, and when you've turned the last page, you'll have a smile on your face.

If you get the impression that I love these books, you would be correct. I've read four books in this eleven-book series. All four have been "Wow" books for me. I've never had this happen before, but oh, am I ever enjoying it.