Destiny of the Republic by Candice Millard 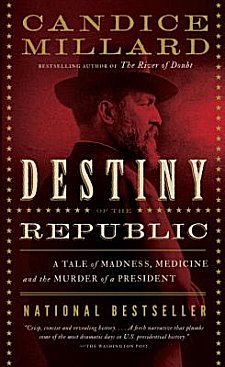 First Line: Crossing the Long Island Sound in dense fog just before midnight on the night of June 11, 1880, the passengers and crew of the steamship Stonington found themselves wrapped in impenetrable blackness.

One of the best books out of the thousands that I've read over a lifetime is Candice Millard's The River of Doubt: Theodore Roosevelt's Darkest Journey. It's a perfect blend of history, in-depth character analysis, and narrative drive. This book cemented Theodore Roosevelt as one of my favorite presidents and Candice Millard as a writer to watch. When I first read about Destiny of the Republic, I knew I would be getting a copy. Some things are just chiseled in stone. What I didn't realize is that Millard's book would make me (once more) shake my head at what's left out of history books-- especially those that are supposed to be educating children-- and make me mourn the death of a man who could've done so much for this country.

When I was in school, all I learned about President James Garfield were two facts: (1) he wasn't in office long enough to do anything, and (2) he was assassinated by a crazy person. That's it. Leave it to a gifted historian like Millard to show me just how much I wasn't taught. Garfield was a truly extraordinary man. He was born to a life of extreme poverty in a log cabin in rural Ohio, yet he grew to be a formidable scholar, a celebrated member of Congress, and a president who swore to take on the corrupt political machine running the country.

Garfield knew personally the power of education to transform lives, and he never sought any political office he won-- including the office of President of the United States. Those who believed in him nominated him and worked to get him elected, one such campaign costing the whopping sum of $150. He had a clear vision of what this country could become-- through education, science, equality-- and it didn't take others long to realize this. When geologist and explorer John Wesley Powell needed support for a surveying expedition, he turned to Garfield, and with his help, Powell explored the Colorado River and the Grand Canyon.

Threaded throughout the diamond mine of information about Garfield is the story of a small-minded man who believed the world owed him fame and wealth and glory. This con man who skipped out on hotel bills was Charles Guiteau, the man who would shoot President James A. Garfield in the back.

Millard builds her character study of Garfield until the reader is heartbroken that the man was never allowed to work on his vision for this country. You know what Guiteau is going to do, but it's still painful when the assassination attempt occurs. What the author then proceeds to show us is that the real assassination occurred during the two months that it took Garfield to die. Too weak to  carry on with his duties, Garfield was left to the self-aggrandizing ministrations of a doctor while the political jackals circled to tear off juicy chunks of privilege for themselves before the lions moved in.

What is most horrifying is the fact that Garfield did not have to die, and Millard weaves contemporaries Alexander Graham Bell and James Lister into her narrative to prove the point. There were sterile operating procedures (championed by Lister) in effect at this time. There were people, like Bell, who were working to make medical diagnoses easier. What really killed James Garfield were greed and willful ignorance-- two of the things he'd fought against his entire life.

What makes this book so good is that Candice Millard makes the reader care passionately about the death of a president that took place well over a century ago, and she makes us realize that the very same things that happened then are happening now. Millard is a must-read author for me, and if you like well-researched history that reads like the best fiction, give her a try. I'm sure you'll come to feel the same way I do.