Death Along the Spirit Road by C.M. Wendelboe 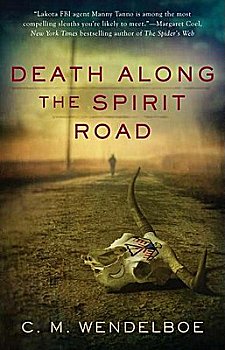 First Line: Manny popped another CD into the player in the rental and fiddled with the controls.

Special agent Manny Tanno likes his job teaching at the FBI academy, and he has less than a month before classes start. Unfortunately his boss insists that he heads out to the Pine Ridge Reservation in South Dakota to investigate a murder. Manny grew up there. It's the last place on earth he wants to go, but he's given no choice.

Jason Red Cloud is well known among the Sioux, and the tribe has given him a great deal of money to build a resort that overlooks the Wounded Knee site on the reservation. It's obvious that someone is opposed to this development because Red Cloud is found on site with a war club buried in his head.

It's not going to be an easy investigation. Manny's local liaison is acting tribal police chief Leon "Lumpy" Looks Twice, a man who's hated him ever since they fell in love with the same woman as teenagers. An added "bonus" is the fact that the tribe's dislike of the FBI is still strong, decades after the American Indian Movement (AIM) actions of the 1970s. Still, Manny gets to work, starts piecing clues together, and it even looks like he's getting close-- someone keeps trying to kill him. Or is it just because he's FBI?

Being a fan of such mystery writers as Craig Johnson, Patrick F. McManus, and Peter Bowen, it's easy to see that I like crime fiction with a strong sense of the western United States. I also enjoy mysteries with a strong Native American element, so when I found Death Along the Spirit Road while browsing in a bookstore, I knew I had to bring it home with me. It was the right decision.

The residents of the Pine Ridge Reservation inhabit the poorest county in the US, and Wendelboe captures the bleakness and despair. There are so many undercurrents-- both historic and personal-- the Massacre at Wounded Knee, the American Indian Movement, distrust of the FBI, alcoholism, joblessness, Manny's own background.... Manny and his brother Reuben went to live with their uncle when their parents died. Manny idolized his older brother, who became involved in AIM and was eventually found guilty of murder and sent to prison. Reuben is now a free man living on the reservation, and along with the murder of Jason Red Cloud, Manny intends to find some way to prove that Reuben is innocent. As you can see, Wendelboe has sunk the shaft of his pen deep into ore-rich ground.

Manny Tanno is self-deprecating, but don't let that fool you. The man knows what he's doing and has a keen eye for detail. He also counts on his appearance to give him an edge: "It was his plainness that dropped people's guard. His plainness allowed them to trust him even when they shouldn't, and people often trusted him with that small piece of information that would convict them." With so much animosity towards him, it's often difficult to tell if the cooperative people are telling everything they know, or if they're holding back vital information. I found that all this ill will and the reasons behind it made the mystery even more intriguing.

From what I've said so far, most of you are probably thinking that this mystery may be too dark and depressing for you. Think again. There are bright spots of laugh-out-loud humor throughout the book. In fact, I think I've finally found a character who's worse on cars than Stephanie Plum. Yes, if you work for a car rental place and Manny Tanno signs on the dotted line, you may as well kiss that vehicle goodbye. When he gets into yet another rental car and reads the note left for him, I cracked up laughing.

If you enjoy mysteries with a strong main character, humor, and brain-teasing plots as well as ones set in the West or ones with a strong Native American element, you can get all those and more by picking up C.M. Wendelboe's Death Along the Spirit Road.